A constructor is a special member function whose main operation is to allocate the required resources such as memory and initialize the object of its class.

The constructor of a class is the first member function to be executed automatically when an object of the class is created.

Similar to other members, the constructor can be defined either within, or outside the body of a class. It can access any data member like all other member functions but cannot be invoked explicitly and must have public status to serve its purpose. The constructor which does not take arguments explicitly is called default constructor.

A constructor has the following characteristics 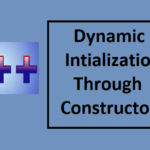