SQL has a number of additional features that we have not described in this chapter but that we discuss elsewhere in the book. These are as follows: 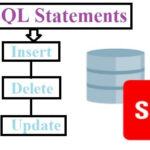 Insert, Delete, and Update Statements in SQL
Specifying Constraints as Assertions and Actions as Triggers