Air pollution and its control I.C engines convert heat energy into mechanical energy by burning the fuel in its combustion chamber called cylinder. Mostly, petrol and diesel oil are used as fuels for I.C engines. These fuels contain hydrogen and carbon in various combinations. During combustion, oxygen combines with hydrogen and carbon to form Water (H2O), Carbon monoxide (CO) and Carbon dioxide (CO2).

The oxides of nitrogen together with hydrocarbons react in the presence of sunlight and form petrochemical smog. As a result, smog is created, the atmosphere becomes dirty and breathing becomes difficult. Its bad effect includes crop damage, eye irritation, objectionable odour, decrease of visibility, cracking in rubber.

Smog is a kind of fog mixed with other substances. The smog covers the cities like a blanket for days together during winter. The heat generated in large cities tends to circulate air within a dome like shape. Smog among with smoke is the most visible evidence of air pollution.

Some of the atmospheric pollutants are not visible until mixed with moisture. Unburnt petrol, carbon monoxide, leaded compounds from leaded petrol and other gases which pollute the air, may not be seen. All these pollutants are deadly harmful for men, animals and food crops.

Men inhale nearly 15kg of air per day. If these pollutants are added to the air, it gives harmful effects to men such as asthma, eczema, omphysema, cardiovascular troubles, lung and stomach cancer.

Air Pollution and Its Control

1) Carbon monoxide : CO is produced because of insufficient supply of air for combustion. CO has more affinity than oxygen for hemoglobin in our blood. This reduces the ability of hemoglobin to carry O2 to the body tissues. Hence, it will affect the nervous system and vision, if the percentage of CO is more. Finally, it affects hearts.

2) Oxides of nitrogen : In high temperature, nitrogen reacts with oxygen and produces nitric oxide and nitrogen dioxide. They affect living organisms. They affect blood purification system. It may be mixed with moisture and produces dilute nitric acid in the heart and affects hearts.

3) Hydrocarbons : Hydrocarbon is produced due to incomplete combustion. Hydrocarbon produces smog. This affects vision. Smog is the mixture of fog and smoke.

4) Photo chemical smog : Some hydrocarbons and oxides of nitrogen in the exhausts react with, atmospheric air in the presence of sunlight and produce photochemical smog. It damages the plant’s life. It reduces the visibility. It produces eye irritation and affects the respiratory system of human beings.

5) Smoke : Smoke is produced because of insufficient mixing of fuel and air. It contains CO and CO2. When cold starting, blue white smoke is produced when more carbon particles are mixed with exhaust. Smog is produced by smoke. It causes irritation of the eyes, coughing, headache and vomiting.

6) Lead : Lead is poisonous. It is a toxic air pollutant. It is produced from the combustion of gasoline. It affects liver and kidneys. It causes mental effects to children.

7) Particulate : Particulates are minute separate particles found in the air. They may be solid or liquid particles. The dust soot and fly ash are included in it. It causes respiratory diseases like bronchitis and lung cancer and allergic diseases.

8) Sulphur oxide : Sulphur oxide is produced if the fuel has sulphur. It may damage the plants. It causes irritation to eye and throat and gives respiratory troubles to children. It corrodes materials. 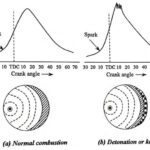 Knocking or Detonation in S.I Engines 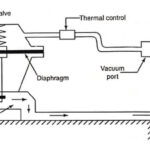