In the 1960s, computers were mainly mainframes with a few dozen terminals attached to them. These terminals were usually in the same building as the mainframe and were directly connected to it. In some cases, the terminals were installed in remote locations and connected through a modem attached to a dial-up line. The university of Hawaii chose a different organisation. Instead of using telephone lines to connect the distant terminals, they developed the first packet radio technology [Abramson1970]. Until then, computer networks were built on top of either the telephone network or physical cables. ALOHANet showed that it was possible to use radio signals to interconnect computers.

The first version of ALOHANet, described in [Abramson1970], operated as follows: First, the terminals and the mainframe exchanged fixed-length frames composed of 704 bits. Each frame contained 80 8-bit characters, some control bits and parity information to detect transmission errors.

To deal with this problem as well as transmission errors, the mainframe verified the parity bits of the received frame and sent an acknowledgement on its channel for each correctly received frame. The terminals on the other hand had to retransmit the unacknowledged frames. As for TCP, retransmitting these frames immediately upon expiration of a fixed timeout is not a good approach as several terminals may retransmit their frames at the same time leading to a network collapse.

A better approach, but still far from perfect, is for each terminal to wait a random amount of time after the expiration of its retransmission timeout. This avoids synchronisation among multiple retransmitting terminals.

The pseudo-code below shows the operation of an ALOHANet terminal. We use this python syntax for all Medium Access Control algorithms described in this chapter. The algorithm is applied to each new frame that needs to be transmitted. It attempts to transmit a frame at most max times (while loop).

Each transmission attempt is performed as follows: First, the frame is sent. Each frame is protected by a timeout. Then, the terminal waits for either a valid acknowledgement frame or the expiration of its timeout.

If the terminal receives an acknowledgement, the frame has been delivered correctly and the algorithm terminates. Otherwise, the terminal waits for a random time and attempts to retransmit the frame.

Unfortunately, the analysis also reveals that the channel utilization reaches its maximum at 1/2×e = 0.186 times the channel bandwidth. At higher utilization, ALOHANet becomes unstable and the network collapses due to collided retransmissions.

Packet radio technologies have evolved in various directions since the first experiments performed at the University of Hawaii. The Amateur packet radio service developed by amateur radio operators is one of the descendants ALOHANet.

This network grew and it was possible to connect to servers in several European countries by only using packet radio relays.

Some amateur radio operators also developed TCP/IP protocol stacks that were used over the packet radio service. Some parts of the amateur packet radio network are connected to the global Internet and use the 44.0.0.0/8 prefix.

Many improvements to ALOHANet have been proposed since the publication of [Abramson1970], and this technique, or some of its variants, are still found in wireless networks today. The slotted technique proposed in [Roberts1975] is important because it shows that a simple modification can significantly improve channel utilization. 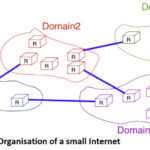 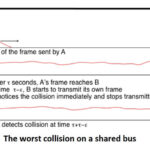