Antijamming with the help of direct sequence spread spectrum signals

In the frequency band of the interest somebody else transmits the signals intentionally. Since these signals lie in the frequency band of the transmission, the interfere the required signal. Hence it becomes difficult to detect the required signals. This is called jamming effect. Such problems normally occur in military applications. If enemy knows the frequency band, then he can send jamming signals intentionally. With the help of spread spectrum method, the transmitted signals are spread over the mid frequency band. Hence these signals appear as noise. Then it becomes difficult for the jammers to send jamming signals. This is called antijamming. For the antijamming application three codes are used in conjunction with direct sequence spread spectrum method. These are Golay code (24, 12) expurgated Golay (24, 11) and maximum length shift register code.

For this application, the signal spectral density is intentionally kept small with respect to the channel noise and receiver noise so that the presence of the signal is not detected easily. Consider that the average received signal power at the intended receiver is Pav and the noise power is Nav. Then the signal is transmitted at low power levels such that Pav /Nav <<1. Hence the receivers which are in the vicinity of the intended receiver cannot detect the presence of the signal. The intended receiver recovers the information bearing signal with the help of processing gain and coding gain. Other receivers do not know the pseudo-noise sequence hence they cannot receive the information signal with the help of processing gain and coding gain. This is called as the signal has low probability of being intercepted. It is also called low detect ability signal transmission.

In this application, many users transmit their signals on the same channel bandwidth. Each transmitter receiver pair has a distinct pseudo-noise (PN) sequence. Thus signals of a particular transmitter are received by its intended receiver only, even if many users are transmitting at the same time. This method is also called spread spectrum multiple access (SSMA). The signals from other users appear as additive interference which are rejected by the spread spectrum decoder. The level of interference depends upon the number of users transmitting at any time. The main advantage of CDMA is that the number of users sharing the same channel can be increased or decreased very easily. Large number of users can transmit on the same channel if their messages are for short periods of time. For this method it is desirable that the PN sequences be mutually orthogonal. 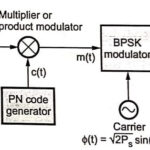