The bellows pressure sensor is a one-piece, collapsible, seamless metallic unit that has deep folds formed from very thin-walled tubing. It looks like a stake of capsules. It is more sensitive than the diaphragm and capsule pressure sensors.

The diameter of the bellows ranges from 1.2 to 30 cm and may have as many as 24 folds. System pressure is applied to the internal volume of the bellows. As the inlet pressure varies, the bellows will expand or contract. The moving end of the bellows is connected to a mechanical linkage assembly. The deflection can be measured in any number of ways. For example, it can be detected via a mechanically- coupled indicating needle [refer fig (a)], a linear variable differential transformer (LVDT) as described in the diaphragm pressure gauge [refer fig (b)], a potentiometer [refer fig (b)], or with many other displacement sensors. As the bellows and linkage assembly moves, either an electrical signal is generated or a direct pressure indication is provided. Figure shows a bellows pressure sensing element along with the potentiometer.

The potentiometric bellows pressure sensor provides a simple method for obtaining an electronic output from a mechanical pressure gauge. The device consists of a precision potentiometer, whose wiper arm is mechanically linked to a bellows or Bourdon element. The movement of the wiper arm across the potentiometer converts the mechanically detected sensor deflection into a resistance measurement, using a Wheatstone bridge circuit.

The flexibility of a metallic bellows is similar in character to that of a helical, coiled compression spring. Up to the elastic limit of the bellows, the relation between increments of load and deflection is linear. In practice, the bellows must always be opposed by a spring, and the deflection characteristics will be the resulting force of the spring and bellows. 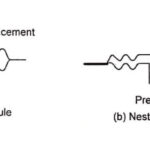 What is Capsule Pressure Sensor? 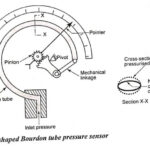