The IOP is similar to a CPU except that it is designed to handle the details of I/O processing, Unlike the DMA controller that must be set up entirely by the CPU, the IOP can fetch and execute its own instructions. IOP instructions are specifically designed to facilitate I/O transfers. In addition, the IOP can perform other processing asks, such as arithmetic, logic, branching, and code translation.

The block diagram of a computer with two processors is shown in Fig. The memory unit occupies a central position and can communicate with each processor by means of direct memory access. The CPU is responsible for processing data needed in the solution of computation tasks.

The IOP provides a path for transfer of data between various peripheral devices and the memory unit. The CPU is usually assigned the task of initiating the I/O program. From then on the IOP operates independent of the CPU and continues to transfer data from external devices and memory.

The data formats of peripheral devices differ from memory and CPU data formats. The IOP must structure data words from many different sources. For example, it may be necessary to take four bytes from an input device and pack them into one 32 -bit word before the transfer to memory.

Data are gathered in the IOP at the device rate and bit capacity while the CPU is executing its own program. After the input data are assembled into a memory word, they are transferred from IOP directly into memory by “stealing” one memory cycle from the CPU. Similarly, an output word transferred from memory to the IOP is directed from the IOP to the output device at the device rate and bit capacity.

In very large scale computers, each processor is independent of all others and anyone processor can initiate an operation. In most computer systems, the CPU is the master while the IOP is a slave processor.

The CPU is assigned the task of initiating all operations, but I/O instructions are executed in the IOP. CPU instructions provide operations to start an I/O transfer and also to test I/O status conditions needed for making decisions on various I/O activities.

The IOP, in turn, typically asks for CPU attention by means of an interrupt. It also responds to CPU requests by placing a status word in a prescribed location in memory to be examined later by a CPU program. When an I/O operation is desired, the CPU informs the IOP where to find the I/O program and then leaves the transfer details to the IOP.

The command words constitute the program for the IOP. The CPU informs the IOP where to find the commands in memory when it is time to execute the I/O program.

This is a simplified example that omits many operating’ details in order to provide an overview of basic concepts. The sequence of operations may be carried out as shown in the flow chart of Fig.

The CPU sends an instruction to test the IOP path. The IOP responds by inserting a status word in memory for the CPU to check. The bits of the status word indicate the condition of the IOP and I/O device, such as IOP overload condition, device busy with another transfer, or device ready for I/O transfer.

The CPU refers to the status word in memory to decide what to do next. If all is in order, the CPU sends the instruction to start I/O transfer. The memory address received with this instruction tells the IOP where to find its program.

The CPU can now continue with another program while the IOP is busy with the I/O program. Both programs refer to memory by means of DMA transfer. When the IOP terminates the execution of its program, it sends an interrupt request to the CPU.

The CPU responds to the interrupt by issuing an instruction to read the status from the IOP. The IOP responds by placing the contents of its status report into a specified memory location. The status word indicates whether the transfer has been completed or if any errors occurred during the transfer. From inspection of the bits in the status word, the CPU determines if the I/O operation was completed satisfactorily without errors.

The IOP takes care of all data transfers between several I/O units and the memory while the CPU is processing another program. It is not possible-to saturate the memory by I/O devices in most systems, as the speed of most devices is much slower than the CPU.

However, some very fast units, such as magnetic disks, can use an appreciable number of the available memory cycles. In that case, the speed of CPU may deteriorate because it will often have to wait for the IOP to conduct memory transfers. 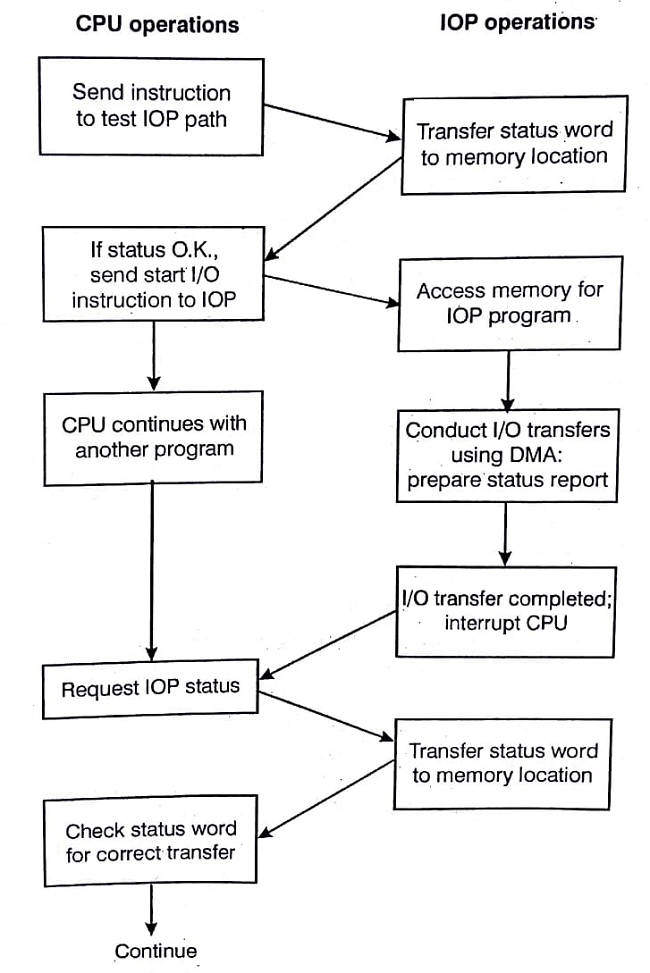 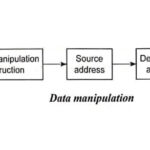 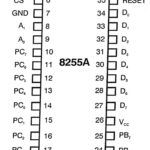