Additive Noise Interference : This noise is generated due to internal solid state devices and resistors etc. used to implement the communication system.

Signal Attenuation : It occurs due to internal resistance of the channel and fading of the signal.

Amplitude and Phase Distortion : The signal is distorted in amplitude and phase because of nonlinear characteristics of the channel.

Channel Bandwidth : This is the maximum possible range of frequencies that can be used for transmission. For example, the bandwidth offered by wireline channels is less compared to fibre optic channels.

Power in the Transmitted Signal : This is the power that can be put in the signal being transmitted. The effects of noise can be minimized by increasing the power. But this cannot be increased to very high value because of the equipment and other constraints. For example, the power in the wireline channel is limited because of the cables.

The power and bandwidth limit the data rate of the communication channel. As we know, the fiber optic channel transports light signals from one place to another just like a metallic wire carriers an electric signal. There is no current or metallic conductor in optical fiber.

The optical fibre has following advantages : 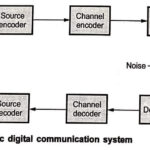