The followings are the components of a tidal power plants.

Dam – The function of dam is to form a barrier between the sea and the basin.

Power house – It consists of turbines, electric generators and other auxiliary equipments. 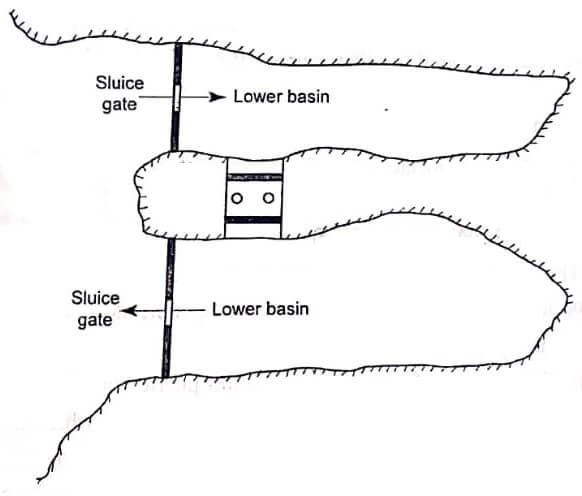 Tidal power plants are classified into

The single basin schemes have only one basin. Power generation is intermittent and mostly during off-peak load periods on daily load curves.

The tidal basin and the sea are separated by a dam or dyke. The rise and fall of tidal water levels provide the potential head.

The turbine generator units are mounted within the ducts inside the dam or dyke.

When there is incoming tide, sea level and tidal basin are equal, the turbine conduit is closed. When the sea level raises, the turbine valves are opened and the sea water flows into the basin through the turbine runner and generates power.

The turbine continues to generate power until the tide passes through its high point and beings to drop. The water head then quickly diminishes till it is not enough to supply the no-load losses.

To gain maximum water level into the basin, by pass valve quickly opens and the water comes into the basin. When sea and basin water level are again equal, the valves are closed as well as the turbine conduit.

The basin level then stays constant while the tide continues to go out. The turbine values are again opened after getting sufficient water head, the water now flows from basin to the sea thereby generating power.

A single basin plant cannot generate power continuously, though it might do so by using a pumped storage plant, if the load supply fluctuates considerably.

A double basin scheme can provide power continuously or on demand which is a great advantage.

In the simplest double basin scheme, there must be a dam between each basin and the sea, and also a dam between the basins containing the power house.

Fig shows a general arrangement of double basin tidal power plant. In this type, the two basins are located apart and their waters are never exchanged.

Water flow from high basin to low basin is through turbines. This flow is controlled such that continuous power is obtained from the plant without waiting for tidal sequence. 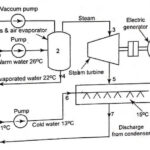 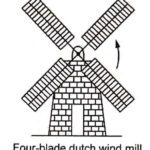