In this case, series of conical cups called revolving element are mounted on a spindle vertically at right angle to the direction of flow.

In a screw or propeller type current meter, the revolving element has of a shaft with its axis parallel to the direction of flow. It has a number of curved vanes or propeller blades mounted around the periphery of the shaft. The current meter unit is immersed or suspended vertically to the required depth in flowing stream of water by cables.

In this, an electric current is passed to the wheel from a battery above the water through wires and a commutator is fixed to the spindle of the revolving blades in order to make and cut-off the electric circuit during each revolution. Sometimes, an electric bell or a head phone is connected in series in the electric circuit to represent an audible signal. In some cases, a revolution counter is also provided to count the number of revolutions. Counting of number of revolutions of wheel is noted by the observer using a stop watch. Then the speed of wheel is calculated from the number of revolutions. Before using calibration data to convert into velocity, the current should be calibrated experimentally.

Calibration of current meter experimentally is done by towing the current meter at various speeds. It is carried out in still water contained in a long tank. Then the speed of the towing carriage is noted to obtain the rotational speed of the wheel. After that, the calibration curve is drawn by plotting the rotational speed in revolution per minute versus the speed of the towing carriage in metres per second in such a way that it corresponds to the velocity of flow of water in the channel. This experimental calibration is done when the current meter is held stationary in the water flowing in the channel. 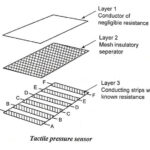 How Does a Tactile Pressure Sensor Work? 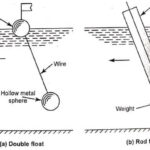 Float Technique for Other Flow Measurements