Once the design of a database is completed and a DBMS is chosen to implement the database languages, the first step is to specify conceptual and internal schemas for the database and any mappings between the two. In many DBMSs where no strict separation of levels is maintained, one language, called the data definition language (DDL), is used by the DBA and by database designers to define both schemas. The DBMS will have a DDL compiler whose function is to process DDL statements in order to identify descriptions of the schema constructs and to store the schema description in the DBMS catalog.

In DBMSs where a clear separation is maintained between the conceptual and internal levels, the DDL is used to specify the conceptual schema only. Another language, the storage definition language (SDL), is used to specify the internal schema. The mappings between the two schemas may be specified in either one of these languages. In most relational DBMSs today, there is no specific language that performs the role of SDL.

Instead, the internal schema is specified by a combination of functions, parameters, and specifications related to storage. These permit the DBA staff to control indexing choices and mapping of data to storage. For a true three schema architecture, we would need a third language, the view definition language (VDL), to specify user views and their mappings to the conceptual schema, but in most DBMSs the DDL is used to define both conceptual and external schemas. In relational DBMSs, SQL is used in the role of VDL to define user or application views as results of predefined queries.

Once the database schemas are compiled and the database is populated with data, users must have some means to manipulate the database. Typical manipulations include retrieval, insertion, deletion, and modification of the data. The DBMS provides a set of operations or a language called the data manipulation language (DML) for these purposes.

In current DBMSs, the preceding types of database languages are usually not considered distinct languages; rather, a comprehensive integrated language is used that includes constructs for conceptual schema definition, view definition, and data manipulation. Storage definition is typically kept separate, since it is used for defining physical storage structures to fine tune the performance of the database system, which is usually done by the DBA staff. A typical example of a comprehensive database language is the SQL relational database language which represents a combination of DDL, VDL, and DML, as well as statements for constraint specification, schema evolution, and other features. The SDL was a component in early versions of SQL but has been removed from the language to keep it at the conceptual and external levels only.

There are two main types of DMLs. A high-level or nonprocedural DML can be used on its own to specify complex database operations concisely. Many DBMSs allow high-level DML statements either to be entered interactively from a display monitor or terminal or to be embedded in a general-purpose programming language. In the latter case, DML statements must be identified within the program so that they can be extracted by a pre-compiler and processed by the DBMS. A low level or procedural DML must be embedded in a general purpose programming language. This type of DML typically retrieves individual records or objects from the database and processes each separately. Therefore, it needs to use programming

language constructs, such as looping, to retrieve and process each record from a set of records. Low-level DMLs are also called record-at-a-time DMLs because of this property. DL/1, a DML designed for the hierarchical model, is a low level DML that uses commands such as GET UNIQUE, GET NEXT, or GET NEXT WITHIN PARENT to navigate from record to record within a hierarchy of records in the database. High-level DMLs, such as SQL, can specify and retrieve many records in a single DML statement; therefore, they are called set-at-a-time or set-oriented DMLs. A query in a high-level DML often specifies which data to retrieve rather than how to retrieve it; therefore, such languages are also called declarative.

Whenever DML commands, whether high level or low level, are embedded in a general purpose programming language, that language is called the host language and the DML is called the data sublanguage. On the other hand, a high-level DML used in a standalone interactive manner is called a query language. In general, both retrieval and update commands of a high-level DML may be used interactively and are hence considered part of the query language.

Casual end users typically use a high level query language to specify their requests, whereas programmers use the DML in its embedded form. For naive and parametric users, there usually are user friendly interfaces for interacting with the database; these can also be used by casual users or others who do not want to learn the details of a high level query language. We discuss these types of interfaces next.

User friendly interfaces provided by a DBMS may include the following:

Menu-Based Interfaces for Web Clients or Browsing. These interfaces present the user with lists of options (called menus) that lead the user through the formulation of a request. Menus do away with the need to memorize the specific commands and syntax of a query language; rather, the query is composed step by step by picking options from a menu that is displayed by the system. Pull-down menus are a very popular technique in Web-based user interfaces. They are also often used in browsing interfaces, which allow a user to look through the contents of a database in an exploratory and unstructured manner.

Forms Based Interfaces. A forms-based interface displays a form to each user. Users can fill out all of the form entries to insert new data, or they can fill out only certain entries, in which case the DBMS will retrieve matching data for the remaining entries. Forms are usually designed and programmed for naive users as interfaces to canned transactions. Many DBMSs have forms specification languages, which are special languages that help programmers specify such forms. SQL*Forms is a form based language that specifies queries using a form designed in conjunction with the relational database schema. Oracle Forms is a component of the Oracle product suite that provides an extensive set of features to design and build applications using forms. Some systems have utilities that define a form by letting the end user interactively construct a sample form on the screen.

Graphical User Interfaces. A GUI typically displays a schema to the user in diagrammatic form. The user then can specify a query by manipulating the diagram. In many cases, GUIs utilize both menus and forms. Most GUIs use a pointing device, such as a mouse, to select certain parts of the displayed schema diagram.

Natural Language Interfaces. These interfaces accept requests written in English or some other language and attempt to understand them. A natural language interface usually has its own schema, which is similar to the database conceptual schema, as well as a dictionary of important words. The natural language interface refers to the words in its schema, as well as to the set of standard words in its dictionary, to interpret the request. If the interpretation is successful, the interface generates a high-level query corresponding to the natural language request and submits it to the DBMS for processing; otherwise, a dialogue is started with the user to clarify the request. The capabilities of natural language interfaces have not advanced rapidly. Today, we see search engines that accept strings of natural language (like English or Spanish) words and match them with documents at specific sites (for local search engines) or Web pages on the Web at large (for engines like Google or Ask). They use predefined indexes on words and use ranking functions to retrieve and present resulting documents in a decreasing degree of match. Such “free form” textual query interfaces are not yet common in structured relational or legacy model databases, although a research area called keyword based querying has emerged recently for relational databases.

Speech Input and Output. Limited use of speech as an input query and speech as an answer to a question or result of a request is becoming commonplace. Applications with limited vocabularies such as inquiries for telephone directory, flight arrival/departure, and credit card account information are allowing speech for input and output to enable customers to access this information. The speech input is detected using a library of predefined words and used to set up the parameters that are supplied to the queries. For output, a similar conversion from text or numbers into speech takes place.

Interfaces for Parametric Users. Parametric users, such as bank tellers, often have a small set of operations that they must perform repeatedly. For example, a teller is able to use single function keys to invoke routine and repetitive transactions such as account deposits or withdrawals, or balance inquiries. Systems analysts and programmers design and implement a special interface for each known class of naive users. Usually a small set of abbreviated commands is included, with the goal of minimizing the number of keystrokes required for each request. For example, function keys in a terminal can be programmed to initiate various commands. This allows the parametric user to proceed with a minimal number of keystrokes.

Interfaces for the DBA. Most database systems contain privileged commands that can be used only by the DBA staff. These include commands for creating accounts, setting system parameters, granting account authorization, changing a schema, and reorganizing the storage structures of a database. 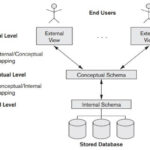 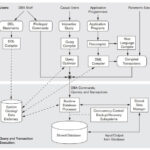