Definition of Electric Circuit : An electric circuit is a collection of electrical devices and components connected together for the purpose of processing information or energy in electrical form. An electric circuit may be described mathematically by ordinary differential equations, which may be linear or nonlinear, and which may or may not be time varying. The practical effect of this restriction is that the physical dimensions are small compared to the wavelength of electrical signals. Many devices and systems use circuits in their design.

Electric Charge : In circuit theory, we postulate the existence of an indivisible unit of charge. There are two kinds of charge, called negative and positive charge. The negatively charged particle is called an electron. Positive charges may be atoms that have lost electrons, called ions; in crystalline structures, electron deficiencies, called holes, act as positively charged particles. See Fig for an illustration. In the International System of Units (SI), the unit of charge is the coulomb (C). The charge on one electron is 1.60219 × 10-19 C. 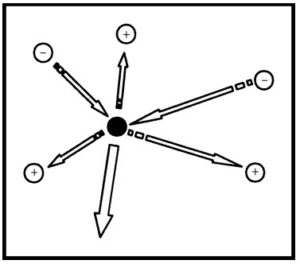 Electric Current : The flow or motion of charged particles is called an electric current. In SI units, one of the fundamental units is the ampere (A). The definition is such that a charge flow rate of 1 A is equivalent to 1 C/s. By convention, we speak of current as the flow of positive charges. See Fig for an illustration. When it is necessary to consider the flow of negative charges, we use appropriate modifiers. In an electric circuit, it is necessary to control the path of current flow so that the device operates as intended.

Voltage : The motion of charged particles either requires the expenditure of energy or is accompanied by the release of energy. The voltage, at a point in space, is defined as the work per unit charge (joules/coulomb) required to move a charge from a point of zero voltage to the point in question.

Magnetic and Dielectric Circuits : Magnetic and electric fields may be controlled by suitable arrangements of appropriate materials. Magnetic examples include the magnetic fields of motors, generators, and tape recorders. Dielectric examples include certain types of microphones. The fields themselves are called fluxes or flux fields. Magnetic fields are developed by magnetomotive forces. Electric fields are developed by voltages (also called electromotive forces, a term that is now less common). As with electric circuits, the dimensions for dielectric and magnetic circuits are small compared to a wavelength. In practice, the circuits are frequently nonlinear. It is also desired to confine the magnetic or electric flux to a prescribed path. 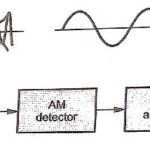 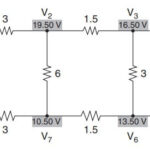