Like other helium gas cooled reactor which have operated or are under development, these will be high temperature units of 850°C, suitable for power generation, thermochemical hydrogen production or other process heat. For electricity, the gas will directly drive a gas turbine. (Brayton cycle) and steam turbine cycle. Fuels would include depleted Uranium and any other fissile or fertile materials. Spent fuel would be reprocessed on site and all the actinides are recycled to minimise production of long lived radioactive wastes.

In this reactor, carbon dioxide gas is used to carry away the heat produced due to nuclear fission in the reactor. The first gas cooled reactor with CO2 gas as coolant and graphite as moderator were developed in Britain during 1956-69. The fuel was natural Uranium, clad with an alloy of magnesium called Magnox. The gas is maintained at a pressure of about 16bar.

Various types of GCR have been developed. England developing an advanced gas cooled reactor (AGR system) and Germany and the USA developing helium cooled, graphite moderated systems. Gas enters the reactor at the bottom. This gas is heated by the heat released due to the fission of fuel and leaves the reactor at the top and flows to heat exchanger. In the heat exchanger, hot gas transfers its heat to water which gets converted into steam. The gas is recirculated with the help of gas blowers.

This steam passes through the turbine and expanded to get mechanical work. Exhaust steam from the turbine is condensed with the help of condenser. 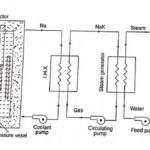 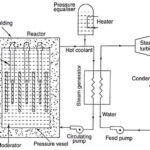