The gripper is shown in Fig. Indicating the tactile sensing and optical sensing features. 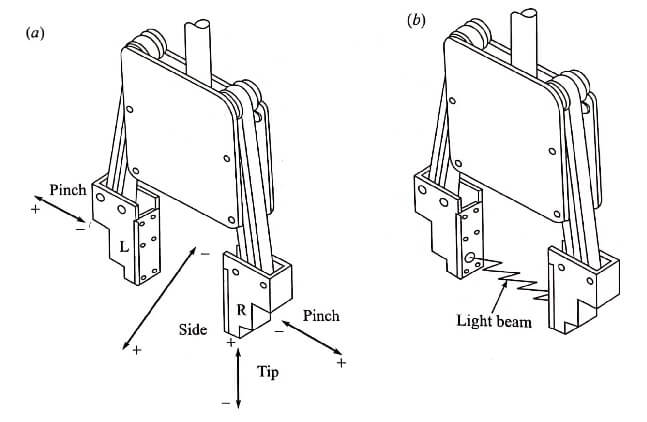 Tip sensors – These indicate whether there is a force pressing up from the bottom of the gripper. This might occur, for instance, if the gripper is pressed against the worktable.

It would also have a value when an object is being held in the gripper with the gripper in a vertical orientation as shown in the figure.

The weight of the object would cause a force to be registered in these sensors. The AML words SLT and SRT are used as the logical I/O identifiers for the left and right sensors in SENSIO and MONITOR commands.

Pinch sensors – If the gripper is closed on an object, these pinch sensors will indicate the pressure with positive measurement values.

If the gripper is used to grasp the inside of a cup by opening against the sides of the cup, negative values will be indicated.

The AML words SLP and SRP are used as the logical I/O identifiers for SENSOR and MONITOR commands.

Side sensors – If the gripper is moved against an obstacle from the side, these sensors will indicate the presence of the obstacle.

The AML words SLS and SRS are used as the logical I/O identifiers for SENSOR and MONITOR commands.

Two examples of the use of these gripper sensors will be used for illustration. The command

would cause the monitor to trip when the force exerted on the left pinch strain gauge deviates by 1000 grams from its current value. The command

would return the following aggregate which contains the force on each of the six strain gauges in the gripper fingers.

These values are in grams of force. The AML word LED_can be used with the SENSIO and MONITOR commands to determine if an opaque object is blocking the light-emitting diode. For example, the command 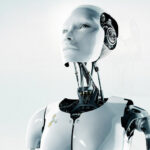