Preamble – Whereas it is expedient to provide a general penal code for India.
Title and extent of operation of the code – This act shall be called the Indian penal code, and shall extend to the whole of India except the state of Jammu and Kashmir.

Independence – The code was originally passed in British Parliament. After 15th of August 1947. the day of independence of India, this code and other enactments were made in force in India by virtue of an order passed by the Governor General in exercise of powers conferred by sections 9 and 18 of the Indian Independence Act, 1947 and later by article 372 of the constitution of India on and from 26th January 1050.

Punishment of offences committed within India – Every person shall be liable to punishment under this code and not otherwise for every act or omission contrary to the provisions thereof, of which he shall be guilty within India.

Extension of Code to extra territorial offences – The provisions of this code apply also to any offence committed by,
Any citizen of India in any place without and beyond India;
Any person in any ship or aircraft registered in India wherever it may be;
Any person on any place without and beyond India committing offence targeting a computer resource located in India.
The word “offence” includes every act committed outside India which, if committed in India Which, if committed in India, would be punishable under this code.
The expression “computer resource” shall have the meaning assigned to it in clause (k) of sub section (1) of section 2 of the information technology Act, 2000 (21 of 2000) 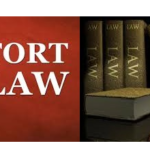 Nature and Definition of Tort – Law of Torts