These pyrometers absorb only infra red pyrometer rays and measure temperature. At some high temperature, a surface starts emitting I-R rays in addition to visible light energy. These I-R rays are used with a detector and electronic circuit to measure the temperature.

Various types of photo electric transducers are used for I-R transducers. One among them is the photovoltaic cell. This responds to wavelengths in infra red pyrometer region and may be used to measure temperature about 400°C. An I-R pyrometer is shown in Fig.

The I-R radiation is focused onto a P-V cell. It is to be seen that the cell is not overheated. The protective window is made of thin glass and serves to protect the cell and filter from physical damage. The filter is used in the range of 1000 – 1200°C in order to reduce the  radiation passed to the photo cell. 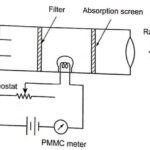