A standard mould for injection moulding is divided in two sides: cavity side and core side. A cavity side consists of sprue and runner system through which the plastic melted from nozzle enters into the mould. A core side consists of core, de moulding system and ejection system. Since this type of mould have one parting line and one opening direction, it cannot be used for parts that have undercut inner and outer screws.

The injection moulding is used to achieve high speed moulding of thermoplastics. The working principle of this process is that the molten thermoplastic is injected into a mould under high pressure. For achieving high pressure, the plunger system is used.

The moulding material is loaded into a hopper from which it is transferred to a heating section by a feeding device where the temperature is raised in the range of 150°C – 370°C. The material is melted and forced by an injection ram or by a plunger through the nozzle and sprue in a closed mould which forms the part. There are two types of injection moulding and given below. 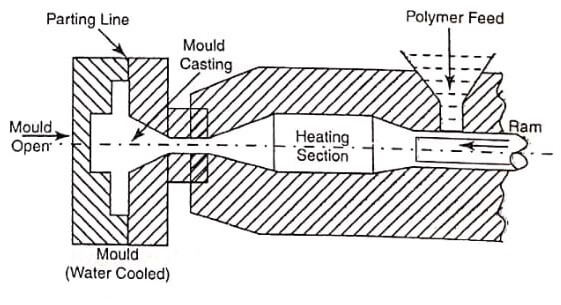 The ram and plunger type injection moulding has two units.

So, it may be split in order to eject the finished component.

The injection unit has hopper, screw, and heating section. In clamping section, it has a mould. In a screw type moulding machine, initially, the pellets are fed into the hopper. The resins are pushed along with the heated reciprocating screw. The screw is moved forward to force the plastic material into the mould. The screw itself is moving backwards and allowing the accumulation of enough material to fill the mould.

The plastics in powder or granular form mixed with resins poured on a hopper which is transferred it to a barrel with a reciprocating screw. The barrel is heated to melt the plastic mixture into liquid state. The rotating screw transport sand injects the molten plastic mixture into a split mould cavity through a small opening called injection nozzle. The mould is then cooled to solidify the molten plastic and the part is removed by opening the split type mould.

In this type also, there are two units to split and eject the finished component, such as
1) Injection unit.
2) Clamping unit.

In a jet moulding, the plastic is preheated about 93°C in the cylinder surrounding the nozzle. The reaction moulding is suitable for the production of polyurethane moulding.

Types of Moulds for Injection Moulding 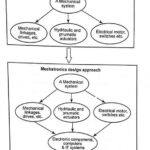 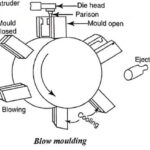