As mentioned in the first section of this chapter, there are three main types of datalink layers : point-to-point links, LANs supporting broadcast and multicast and NBMA networks. There are two important issues to be addressed when using IPv4 in these types of networks. The first issue is how an IPv4 device obtains its IPv4 address. The second issue is how IPv4 packets are exchanged over the datalink layer service.

When point-to-point links are used to attach hosts to the network, automatic configuration is often preferred in order to avoid problems with incorrect IPv4 addresses.

For example, the PPP, specified in RFC 1661, includes an IP network control protocol that can be used by the router in the figure below to send the IPv4 address that the attached host must configure for its interface. The transmission of IPv4 packets on a point-to-point link will be discussed in chapter chap:lan. 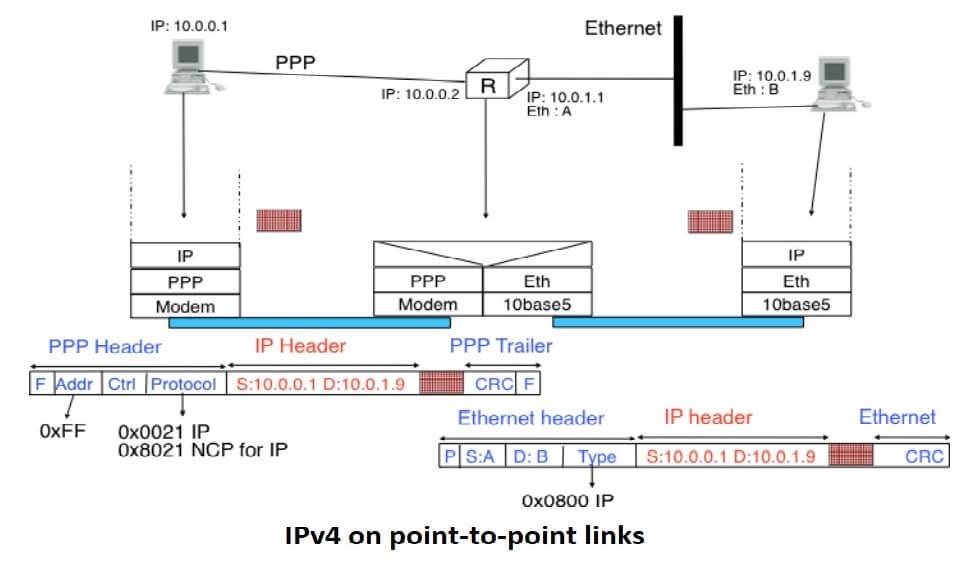 Using IPv4 in a LAN introduces an additional problem. On a LAN, each device is identified by its unique datalink layer address.

For example, the figure below shows four hosts attached to the same LAN configured with IPv4 addresses in the 10.0.1.0/24 subnet and datalink layer addresses represented as a single character 12. In this network, if host 10.0.1.22/24 wants to send an IPv4 packet to the host having address 10.0.1.8, it must know that the datalink layer address of this host is C.

In a simple network such as the one shown above, it could be possible to manually configure the mapping between the IPv4 addresses of the hosts and the corresponding datalink layer addresses.

However, in a larger LAN this is impossible. To ease the utilisation of LANs, IPv4 hosts must be able to automatically obtain the datalink layer address corresponding to any IPv4 address on the same LAN. This is the objective of the Address Resolution Protocol (ARP) defined in RFC 826. ARP is a datalink layer protocol that is used by IPv4.

It relies on the ability of the datalink layer service to easily deliver a broadcast frame to all devices attached to the same LAN.

The easiest way to understand the operation of ARP is to consider the simple network shown above and assume that host 10.0.1.22/24 needs to send an IPv4 packet to host 10.0.1.8. As this IP address belongs to the same subnet, the packet must be sent directly to its destination via the datalink layer service.

When an IPv4 hosts boots, its ARP cache is empty. 10.0.1.22 thus first consults its ARP cache. As the cache does not contain the requested mapping, host 10.0.1.22 sends a broadcast ARP query frame on the LAN. The frame contains the datalink layer address of the sending host (A) and the requested IPv4 address (10.0.1.8).

This broadcast frame is received by all devices on the LAN and only the host that owns the requested IPv4 address replies by returning a unicast ARP reply frame with the requested mapping. Upon reception of this reply, the sending host updates its ARP cache and sends the IPv4 packet by using the datalink layer service. 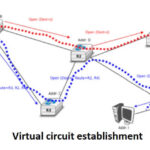 Organisation of the Network Layer – theteche.com