We assumed that the underlying networks over which the IP datagrams are moving are either LANs or point-to-point WANs. In this section, we want to see how an IP datagram is moving through a switched WAN such as an ATM. We will see that there are similarities as well as differences. The IP packet is encapsulated in cells (not just one). An ATM network has its own definition for the physical address of a device. Binding between an IP address and a physical address is attained through a protocol called ATMARP.

ATM, a cell switched network, can be a highway for an IP datagram. Figure shows how an ATM network can be used in the Internet.

we discussed different AAL layers and their applications. The only AAL used by the Internet is AAL5. It is sometimes called the simple and efficient adaptation layer (SEAL). AAL5 assumes that all cells created from one IP datagram belong to a single message. AAL5 therefore provides no addressing, sequencing, or other header information. Instead, only padding and a four-field trailer are added to the IP packet.

AAL5 accepts an IP packet of no more than 65,536 bytes and adds an 8-byte trailer as well as any padding required to ensure that the position of the trailer falls where the receiving equipment expects it (at the last 8 bytes of the last cell). Once the padding and trailer are in place, AAL5 passes the message in 48-byte segments to the ATM layer.

The AAL layer used by the IP protocol is AAL5.

A question that frequently comes up is why do we use AAL5. Why can’t we just encapsulate an IP packet in a cell? The answer is that it is more efficient to use AAL5. If an IP datagram is to be encapsulated in a cell, the data at the IP level must be 53 − 5 − 20 = 27 bytes because a minimum of 20 bytes is needed for the IP header and 5 bytes is needed for the ATM header. The efficiency is 27/53, or almost 51 percent. By letting an IP datagram span over several cells, we are dividing the IP overhead (20 bytes) among those cells and increasing efficiency. 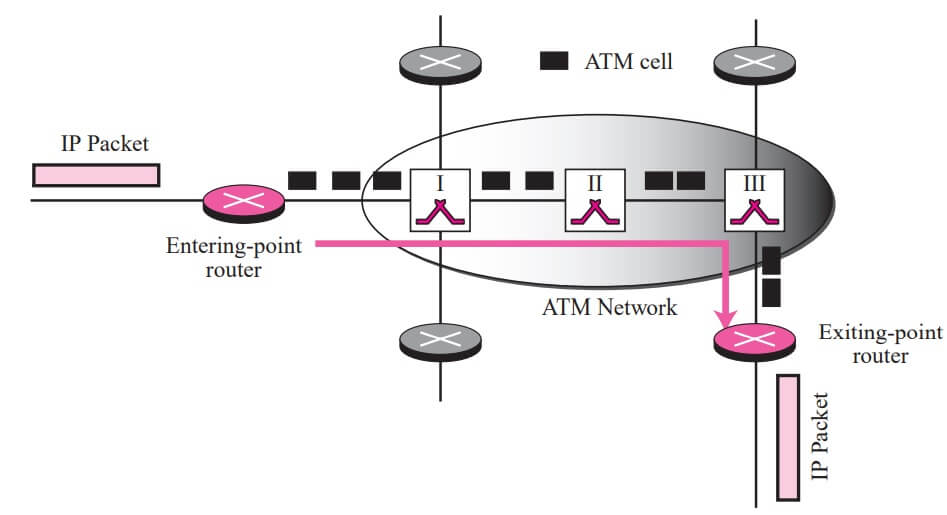 IP Addresses : Each router connected to the ATM network has an IP address. Later we will see that the addresses may or may not have the same prefix. The IP address defines the router at the IP layer. It does not have anything to do with the ATM network.

The entering-point router receives an IP datagram. It uses the destination address and its routing table to find the IP address of the next router, the exiting-point router. This is exactly the same step followed when a datagram passes through a LAN.

The entering-point router uses the services of a protocol called ATMARP to find the physical address of the exiting-point router. ATMARP is similar to ARP.

The virtual circuit identifiers are bound to the physical addresses. 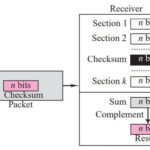 Checksum Calculation at the Sender / Receiver 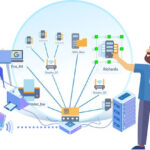