Irrespective of robot configuration, there are several methods that can be used by the programmer during the teach mode to actuate the robot arm and wrist. We list the following three methods:

The first method is the most basic and involves the movement of each joint, usually by means of a teach pendant.

The teach pendant has a set of toggle switches (or similar control devices) to operate each joint in either of its two directions until the end effector has been positioned to the desired point.

This method of teaching points is often referred to as the joint mode. Successive positioning of the robot arm in this way to define a sequence of points can be a very tedious and time-consuming way of programming the robot.

To overcome this disadvantage, many robots can be controlled during the teach mode to move in x-y-z coordinate motions.

These conversions are carried out in such a way that the programmer does not have to be concerned with the substantial computations that are being performed by the controller.

To the programmer, the wrist (or end effector) is being moved in motions that are parallel to the x,y and z axes.

The two or three additional joints which constitute the wrist assembly are almost always rotational, and while programming is being done in the x-y system to move the arm and body joints, the wrist is usually being maintained by the controller in a constant orientation.

The x-y-z method of defining points in space is illustrated in fig for a jointed arm robot. 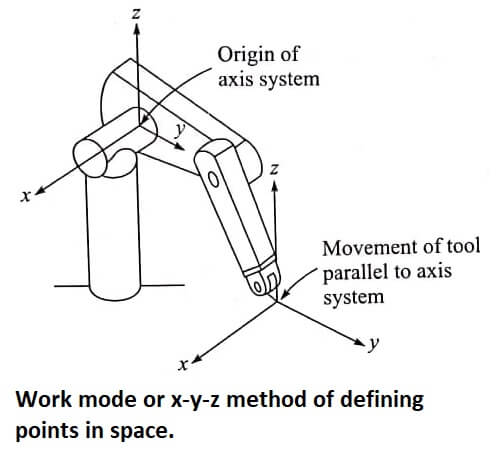 Some robots have the capability for tool coordinate motions to be defined for the robot. This is a Cartesian coordinate system in which the origin is located at some point on the wrist and the xy plane is oriented parallel to the faceplate of the wrist. 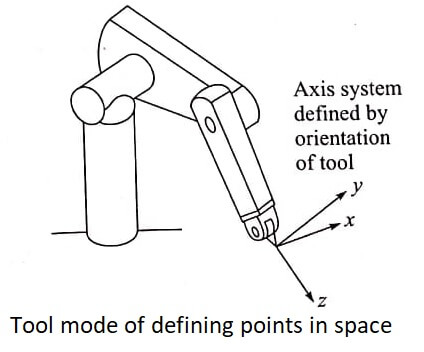 Hence, this method of moving the robot could be used to provide a driving motion of the tool. Again, a significant amount of computational effort must be accomplished by the controller in order to permit the programmer to use tool motions for defining motions and points. 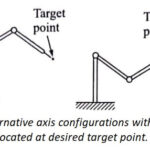 A Robot Program as a Path in Space 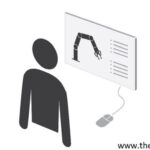