In a null type of instrument, a zero or null indication leads to determination of the magnitude of measured quantity. The null condition is dependent upon some other known conditions. 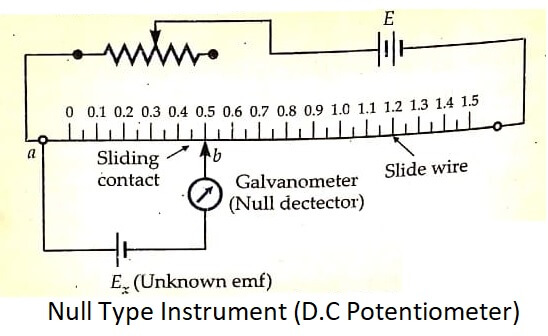 Fig shows the elementary form of a D.C potentiometer. It is a null type of instrument wherein an unknown emf, Ex is measured. The slide wire of the potentiometer has been calibrated in terms of emf with the help of a standard emf source. The null detector is a current galvanometer whose deflection is proportional to the unbalance emf, the difference between the emf Eab across portion a b of slide wire and the unknown emf Ex. As soon as the two are equal, there is no current through the galvanometer and therefore it shows zero deflection thereby indicating null conditions Therefore, the unknown emf Ex is equal to Eab, which is directly indicated by the calibrated scale placed alongside the slide wire. 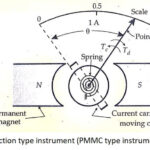