A number of drugs are yielded by plants and animals. This classification can be done according to the physical and chemical properties of the drug.

In this, drugs are categorised in the following groups:

Alkaloids : Compounds made up of carbon, hydrogen, nitrogen and oxygen are known as alkaloids (alkali-like). They are administered in small doses as they possess bitter taste and are often poisonous.

Glycosides : Ether-like combinations of sugars with other organic substances found in plants are referred glycosides. Glucoside is the term used when the glycosides are linked with glucose. Generally, for the action of glycoside, the carbohydrate molecule is not essential, and it may be removed in the body to liberate the active aglycone or genin. The pharmacological actions occur due to the presence of aglycone component, while the sugar modifies the solubility, penetration, distribution, reactivity, and duration of action of the glycoside.

Oils : Water insoluble, highly viscous liquids are termed as oil. These properties render it a greasy feel. Three kinds of oils are recognised:

Tannins : Tannins are non-nitrogenous compounds with the properties of astringent like properties. Two types of tannins are known, i.e., the pyrogallol tannins and the pyrocatechol tannins.

Pyrogallol tannins are glycosides of glucose, occurring in oak galls, while pyrocatechol tannins are sugar-free derivatives of catechol, e.g., in catechu and eucalyptus. Burns and diarrhoea are treated using tannins.

Gums : Gums are plant exudates, and chemically are polysaccharides that on hydrolysis yield simple sugars. Some gums swell up when water is added to them and form adhesive mucilaginous masses; while others remain unchanged.

They act as hydrophillic (water-loving) colloids and function as bulk laxatives in the gut, e.g., agar and psyllium seeds. Natural gums used as the laxative have been replaced by synthetic hydrophilic colloids like methylcellulose and sodium carboxymethyl cellulose.

Resins : They are obtained by oxidation and polymerisation of volatile oils. A common example of a solid resin is the rosin used by violinists. Though they are soluble in alcohol, ether and chloroform, but are insoluble in water.

Oleoresins (aspidium); gum-resins (asafoetida); oleo-gum-resin (myrrh); balsams (benzoin, tolu, Peru) are the various types of resins. The antiseptic and protective properties of balsams are used in the treatment of cough and bronchitis.

Antibiotics : Antibiotics are chemical substances which ensure a toxic (bactericidal) or inhibitory (bacteriostatic) action on microbes. They are derived from living cells. Moulds, yeasts and bacteria form the main sources of antibiotics.

Hormones : Hormones are produced by the endocrine glands of animal. They are essentially specialised chemicals. In medicine, hormones are largely used as substitution therapy. The chemical structure of every hormones vary, e.g., hormone insulin is a polypeptide compound; sex hormones and corticosteroids are steroids; thyroxine is an iodine derivative of the amino acid tyrosine.

On the Basis of Physical Properties of Drugs 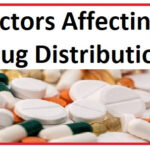