It is defined as the degree of risk in the ability to survive imminent disturbances (contingencies) without interruption of customer service. It depends on the operating condition and the contingent probability of a disturbance. To be secure, the power system must

Power System Stability : The continuance of intact operation of the power system following a disturbance.
Power System Reliability : The probability of satisfactory operation over the long run.
It is the ability to supply adequate electric a service on a nearly continuous basis, with few interruptions over an extended period.
System Black-out : Process of cascading failures continues, the entire system or large parts of it may completely collapse.
Example of black-outs:
1. July 2, 1996 – WSCC [Western North American Interconnected System] 2. August 10, 1996 – WSCC
3. November 1998 – Brazil
4. July 29, 1999 – Taiwan
5. August 14, 2003 – North East U.S and Ontario

Security monitoring is the on-line identification of the actual operating conditions of a power system. It requires system-wide instrumentation to gather the system data as well as a means for the on-line determination of network topology involving an open or closed position of circuit breakers. A state estimation has been developed to get the best estimate of the complex bus voltage at any instant from the redundant set of telemetered data and breaker status. The state estimation provides the database for security analysis as shown in Fig.

The estimated values are then checked against the overload limits. If no limit is violated, the output of the estimator may be used for contingency evaluation. Hence overload limits are reached, suitable remedial measures help the operator to choose between rescheduling, line switching and load shedding. 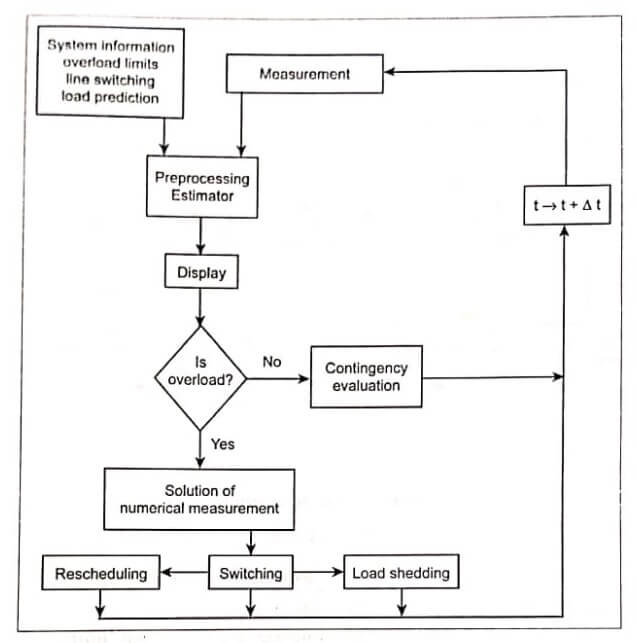 The functioning of a security monitoring system is shown in Fig. Effective operation of power system required that critical quantity be measured and the values of measurements be transmitted to a central location. Such systems of measurements end data transmission are called telemetry systems.

The security monitoring functions are given below

Power system must be designed to stabilize and to operate at acceptable voltage, frequency without loss of load. Security control executing the program by using study sequence. They are: 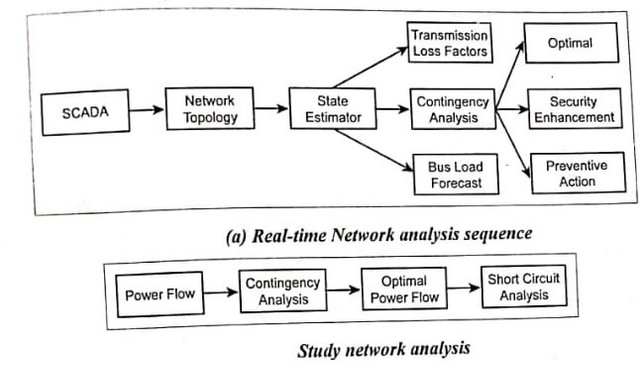 State estimators are executed depends on the demand or status change due to circuit breaker operation like opening of the line, etc. From Fig.(b) the state estimator receives information from SCADA system and the network topology and stores the state of the system (V and 8) in a central location called database. Power system application like power flow, optimal power flow, contingency analysis and short circuit analysis are executed using the state of the system were computed by state estimation.

Security Control requires the following functions.
Network Topology Processor: To determine model of the network.
State estimator: To determine best estimate of the state of the system using real time status and measurements.
Power flow: To calculate V, 8, power flows for the steady state condition.
Contingency analysis: To determine the events which are harmful to the system by determining the states.
Optimal power flow: To optimize a specified objective function by using controller action.
Security enhancement: To alleviate an existing overload in the system by using corrective control actions.
Preventive action: Before the occurrence of contingency event, preventive action has to be taken.
Bus load forecasting: To forecast the load by using real time measurements.
Transmission loss factors: To calculate the impact on transmission losses by using incremental transmission loss (ITL).
Short circuit analysis: To determine the fault current for different types of faults like LG, LL, LLG, 3Ø.

System security involves practices designed to keep the system operating when components fail. Systems security can be broken down into three major functions that are carried out in an energy control centre:

Contingency analysis : The results of this type of analysis allow systems to be operated defensively. Many of the problems that occur on a power system can cause serious trouble which is often the case with cascading failures. In this analysis, certain programs are used that model possible system troubles before they arise. These programs are based on a model of the power system and are used to study outage events and alarm the operators about any potential overloads or out-of-limit voltages.

As a consequence of many widespread black-outs in interconnected power systems, the priorities for operation of the modern power systems have evolved to the following :

Any piece of equipment in the system can fail either due to internal causes or due to external causes such as lightning stroke, object hitting transmission towers, or human errors in setting relays. Thus, most power systems are designed to have sufficient redundancy to withstand all major failure events.

Reliability is a probabilistic index defined as the long term average number of days on which daily peak load exceeds the available generating capacity. Security depends upon the reserve capacity available in a given situation and the contingency probability of disturbances. It refers to robustness of the system in comparison to disturbances. 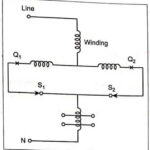 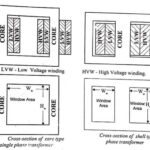