Laser stands for “Light Amplification by Stimulated Emission of Radiation”. Laser instruments are devices to produce powerful, monochromatic collimated beam of light in which the waves are coherent.

The development of laser gives production of clear coherent light. The biggest advantage of this coherent light is that whole energy appears to be emanating from a very small point.

The laser beam can be focused easily into either a parallel beam or into a very small point by the use of lens.

A typical helium neon laser source produces a 1 to 2mm diameter beam of pure red light having power of 1MW. So, this type of a beam is focused at a point. It means, beam has very high intensity.

The laser is used extensively for interferometry. Upto a great distance beam has no divergence but ther. it begins to expand at a rate of about 1 mm/m.

The laser beam is visible and it can be observed easily. Its centre can be easily judged to an accuracy of 1mm over 2m. This is used for very accurate measurements in the order of 0.1 um in 100m.

A laser beam projected directly onto a position detector is a method of alignment used in a number of commercially available systems. The laser with its highly controlled frequency modes and coherent output are used extensively for interferometry (He – Ne gas type).

Laser is suitable for more general applications where a very convenient, collimated and high intensity source is required. (Precision, accuracy, no contact and hot moving parts)

Laser telemetric system is a non contact gauge that measures with a collimated laser beam. It measures at the rate of 150 scans per second.

The receiver collects the laser beam and photo electrically senses the laser light transmitted through the object being measured. The processor receives the signal and converts it into convenient form.

The transmitter has the following components.

After sensing, the processor electronics take the received signals and convert them into a convenient form and then display the dimensions being gauged. 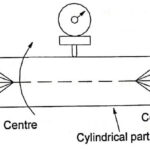 Devices Used for Measurement of Roundness 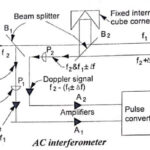