Proximity sensors are devices that indicate when one object is done another object. How close the object must be in order to activate the sensor is dependent on the particular.

The distances can be anywhere between several millimeters and several feet. Some of these sensors can also be used to measure the distance between the object and the sensor, and these devices are called range sensors.

Proximity and range sensors would typically be located on the wrist or end effector since these are the moving parts of the robot. One practical use of a proximity sensor in robotics would be to detect the presence or absence of a workpart or other object.

Another important application is for sensing human being in the robot workcell. Range sensors would be useful for determining the location of an object (the workpart) in relation to the robot.

A variety of technologies are available for designing proximity and range sensors. These technologies include optical devices, acoustics, electrical field techniques (eddy currents and magnetic fields), and others. We will survey only a few of the possibilities in the following paragraphs.

Optical proximity sensors can be designed using either visible or invisible (infrared) light sources. Infrared sensors may be active or passive. The active sensors send out an infrared beam and respond to the reflection of the beam against a target.

The infrared-reflectance sensor using an incandescent light source is a common device that is commercially available. The active infrared sensor can be used to indicate not only whether or not a part is present, but also the position of the part.

By timing the interval from when the signal is sent and the echo is received, a measurement of the distance between the object and the sensor can be made. This feature is especially useful for locomotion and guidance systems.

Another optical approach for proximity sensing involves the use of a collimated light beam and a linear array of light sensors. By reflecting the light beam off the surface of the object, the location of the object can be determined from the position of its reflected beam on the sensor array.

This scheme is illustrated in fig. The formula for the distance between the object and the sensor is given as follows: 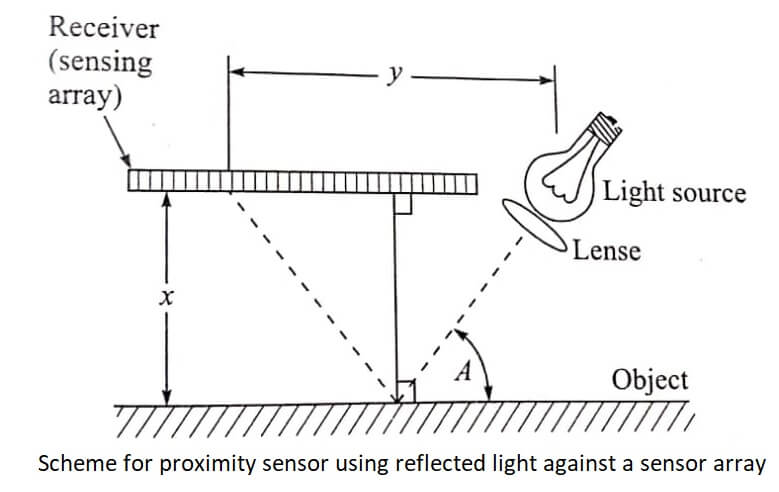 where x the distance of the object from the sensor

y = the lateral distance between the light source and the reflected light beam against the linear array. This distance corresponds to the number of elements contained within the reflected beam in the sensor array

A = the angle between the object and the sensor array as illustrated in fig.

Use of this device in the configuration shown relies on the fact that the surface of the object must be parallel to the sensing array.

Acoustical devices can be used as proximity sensors. Ultrasonic frequencies (above 20,000 Hz) are often used in these devices because the sound is beyond the range of human hearing. One type of acoustical proximity sensor uses a cylindrical open-ended chamber with an acoustic emitter at the closed end of the chamber.

The emitter sets up a pattern of standing waves in the cavity which is altered by the presence of an object near the open end.

A microphone located in the wall of the chamber is used to sense the change in the sound pattern. This kind of device can also be used as a range sensor.

Proximity and range sensors based on the use of electrical fields are commercially available. Two of the types in this category and eddy-current sensors and magnetic field sensors.

Eddy-current devices create a primary alternating magnetic field in the small region near the probe. This field induces eddy currents in an object placed in the region so long as the object is made of a conductive material.

These eddy currents produce their own magnetic field which interacts with the primary field to change its flux density. The probe detects the change in the flux density and this indicates the presence of the object.

Magnetic field proximity sensors are relatively simple and can be made using a reed switch and a permanent magnet. The magnet can be made a part of the object being detected or it can be part of the sensor device.

In either case, the device can be designated so that the presence of the object in the region of the sensor completes the magnetic circuit and activates the reed switch.

This type of proximity sensor design is attractive because of its relative simplicity and because no external power supply is required for its operation.

Considerations in Gripper Selection and Design
Uses of Sensors in Robotics – theteche.com