Robot workcells can be organized into various arrangements or layouts.

These layouts can be classified into three basic type:

In the robot-centered cell, illustrated in fig, the robot is located at the approximate center of the cell and the equipment is arranged in a partial circle around it.

Initial installations of industrial robots in the 1960 s were illustrative of this case. Die casting, one of the very first applications for a robot, required the robot to unload the part from the die after each casting cycle and dip it into a quenching bath.

Other production machine applications required the robot to both load and unload the workpart.

For some of these applications, the cycle times of the machine were relatively long compared to the part-handling time of the robot.

Metal-machining operations are examples of this imbalance condition. This required the robot to be idle for a high proportion of cycle, causing low utilization of the robot.

To increase the robot utilization, the workcell concept was developed in which one robot serviced several machines as pictured in fig. 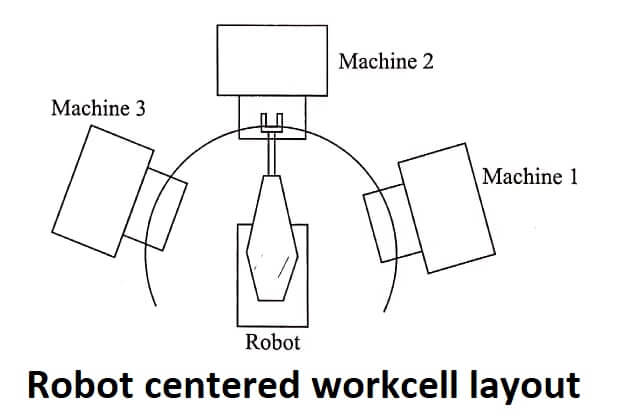 An application of the robot-centered cell in which the robot performs the process is arc welding. In this case, the root accomplishes the production operation itself, rather than servicing a production machine tool.

With these robot-centered cell arrangements, a method for delivering the workparts into and/or out of the cell must be provided.

Conveyors, parts feeders with delivery chutes, and pallets are the means for accomplishing this function.

Machining, die casting, plastic molding, and other similar production operations for discrete part production are examples of this case.

These devices are used to present the parts to the robot in a known location and orientation for proper pick up.

In arc welding, human operators are often used to accomplish the parts loading and unloading function for the robot.

With the in-line cell arrangement, pictured in fig, the robot is located along a moving conveyor or other handling system and performs a task on the product as it travels past on the conveyor.

Many of the in-line cell layouts involve more than a single robot placed along the moving line.

A common example of this cell type is found in car body assembly plants in the automobile industry. Robots are positioned along the assembly line to spot, and weld the car body frames and panels.

The three categories of transfer systems that can be used with the in-line cell configuration are: 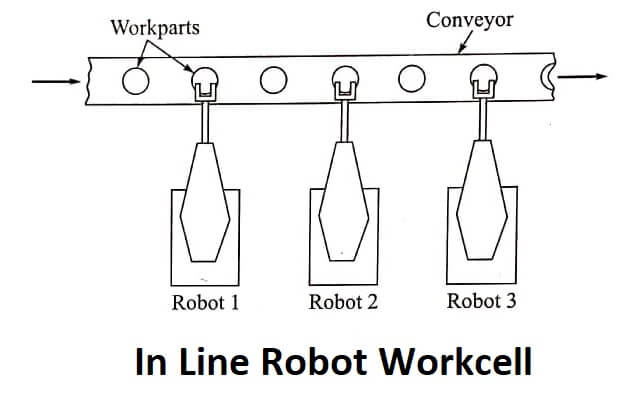 Intermittent transfer system – It moves the parts with a start-and-stop motion from one workstation along the line to the next.

It is sometimes called a synchronous transfer system because all of the parts are moved simultaneously and then registered at their next respective stations.

In a robot layout using intermittent transfer, the robot is in a stationary location and constitutes one position along the line at which a part or product stops for processing.

The advantage possessed by the intermittent transfer system in robot applications is that the part can be registered in a fixed location and orientation with respect to the robot during the robot’s work cycle.

With this type of transfer system, the workparts are moved continuously along the line at a constant speed.

This means that the position and orientation of the part is continuously changing with respect to any fixed location along the line.

(a) The moving baseline tracking system : It involves the use of some sort of transport system to move the robot along a path parallel to the line of travel of the workpart while the operation is performed on the part.

In this way, the relative position of the part and the robot remain constant during the work cycle.

The problem with this arrangement is that an additional degree of freedom must be provided for the robot to move along the conveyor.

This additional degree of freedom is usually accomplished by mounting the robot on a cart which can be moved along a track or rail parallel to the conveyor.

This solution involves considerable capital expense to construct the system to maintain accurate registration between the robot and the part.

One of the operational problems that must be taken into account in the design of a production line with several robots is the potential interference and collision problem between robots at adjacent stations along the line.

The easiest way to solve the problem is to space the robots sufficiently to avoid the possibility of interference.

However, this requires a significant amount of floor space.

An alternative solution is to provide the wokcell with enough intelligence that it knows where each robot is at any moment, and can control the sequence so as to avoid collisions.

(b) Stationary baseline tracking system : In this, the robot is located in a stationary position along the line but its manipulator is capable of tracking the moving workpart.

‘Tracking’ in this context means that the robot is able to maintain the positions of the programmed points, including the orientation of the end effector and the motion velocities, in relation to the workpart even though the part is moving along a conveyor.

The engineering problems that must be solved to implement a stationary baseline tracking system are considerable although different from those encountered in the moving baseline system.

First, the robot must have sufficient computational and control capability to accomplish tracking.

This requires that the regular motion pattern of the manipulator be continuously translated in space in a direction parallel to the conveyor and at a speed equal to that of the conveyor.

This allows the relative positions of the end effector and the part to be maintained during the cycle.

A second problem, related to the first is concerned with the robot’s ‘tracking window.’

The tracking window can be thought of as the intersection of the robot’s work volume with the line of travel of the workpart along the conveyor.

This concept is illustrated in fig. Allowances must be factored into this definition to account for manipulation of the wrist and end effector and for access to portions of the workpart that might be difficult to reach.

For a robot with tracking capability, the total motion cycle in a particular application must be consistent with the tracking window for that application. A third problem involves the sensing of the part on the conveyor. 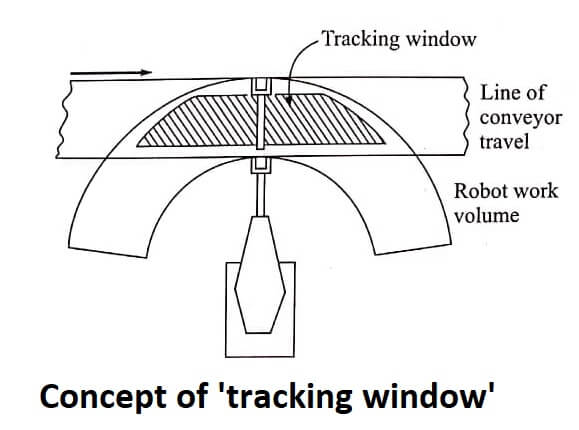 For cells in which different product models will be processed, a sensor system must be used to identify which model is being delivered to the robot.

A sensor is also required to determine that the part has entered the tracking window and that the robot can commence its work cycle.

Other sensors are needed to track the position and velocity of the part during the cycle so as to coordinate with the robot tracking system.

It is risky to presume that there will be no variations in the location and speed of the part as it is being processed.

In this materials-handling system, each part moves independently along the conveyor in a stop-and-go fashion.

When a particular workstation has completed its processing of a part, that part proceeds to move toward the next workstation in the line.

Hence, at any given moment, some workparts are being processed while others are located between stations.

The design and operation of this type of transfer system is more complicated than the other two because each part must be provided with its own independently operated, moving cart.

However, the problem of designing and controlling the robot system used in conjunction with the power-and-free method is less complicated than for the continuous transfer method.

For the irregular timing of arrivals on the non-synchronous transfer system, sensors must be provided to indicate to the robot when to begin its work cycle.

The more complex problems of registration between the robot and the part that must be solved in the continuously moving conveyor systems are not encountered on either the intermittent transfer or the non-synchronous transfer.

The third category of robot cell design is one in which the robot is capable of moving to the various pieces of equipment within the cell.

This is typically accomplished by mounting the robot on a mobile base which can be transported on a rail system.

The rail systems used in robot cells are either tracks fastened to the floor of the plant or overhead rail systems.

Figure illustrates the concept of the track-on-floor system, while the overhead rail system is shown in fig.

The advantage of the overhead rail system compared to the floor-mounted track system is that less floor space is required. The disadvantage is the increased cost of constructing the overhead system.

A mobile robot cell would be appropriate when the robot is servicing several machine tools with long processing cycles.

In this situation, the robot would be able to share its time among the machines without significant idle time for either itself or the machines it is servicing.

If a separate robot were to service each of the machines, the utilization of the robots would be low because most of their time would be spent waiting for the machine cycles to complete.

Accordingly, one of the problems in the design of a mobile robot cell is to find the optimum number of machines for the robot to service.

The objective in this problem is to maximize the number of machines in the cell without causing idle time on any of the machines. 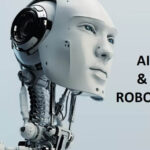 Artificial Intelligence and Robotics
Other Considerations in Workcell Design