The robot’s capacity to move its body, arm, and wrist is provided by the drive system used to power the robot. The drive system determines its speed of operation, load carrying capacity, and its dynamic performance.

To some extent, the drive system determines the kinds of applications that the robot can accomplish. In this and the following sections, we will discuss some of these technical features.

Commercially available industrial robots are powered by one of three types of drive systems. These three systems are:

Hydraulic drive and electric drive are the two main types of drives used on more sophisticated robots, while pneumatic drive is used for low load carrying capacity robots and in cases where oil and electricity cannot be used (fire hazard).

Hydraulic drive is generally associated with larger robots. The usual advantages of the hydraulic drive system are that it provides the robot with greater speed and strength.

The disadvantages of the hydraulic drive system are that it typically adds to the floor space required by the robot, and that a hydraulic system is inclined to leak oil which is a nuisance.

Hydraulic drive systems can be designed to actuate either rotational joints or linear joints. Rotary vane actuators can be utilized to provide rotary motion, and hydraulic pistons can be used to accomplish linear motion.

Electric drive systems do not generally provide as much speed or power as hydraulic systems. However, the accuracy and repeatability of electric drive robots are usually better.

These motors are ideally suited to the actuation of rotational joints through appropriate drive train and gear systems. Electric motors can also be used to actuate linear joints (e.g., telescoping arms) by means of pulley systems or other translational mechanisms.

The economics of the two types of drive systems are also a factor in the decision to utilize hydraulic drive on large robots and electric drive on smaller robots.

It turns out that the cost of an electric motor is much more proportional to its size, whereas the cost of a hydraulic drive system is somewhat less dependent on its size.

It should be noted that there is a trend in the design of industrial robots toward all electric drives, and away from hydraulic robots because of the disadvantages discussed above.

Pneumatic drive is generally reserved for smaller robots that possess fewer degrees of freedom (two- to four-joint motions). These robots are often limited to simple pick-and-place operations with fast cycles.

These drives have the added advantage of having compliance or ability to absorb some shock during contact with devices to provide translational movement of sliding joints. It can also be used to operate rotary actuators for rotational joints. 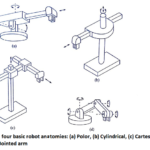 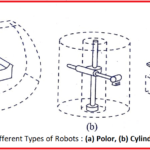