A robot moves in space to perform tasks and hence it needs actuators to move the links and sensors to know where each joint is. Sensors inform the controller by how much each joint has moved and thus enables the controller to enforce a particular velocity or position during motion.

As we have seen in the previous section each joint has an independent control structure in which there is an actuator, reduction gear mechanism and a sensor at each joint.

Sensors can be divided into two parts:

In case any of these sensors fail the robot can still function but its ability to interact with the external world is reduced.

Potentiometers Potentiometers are analog devices whose output voltage is proportional to the position of a wiper. Fig illustrates a typical pot. 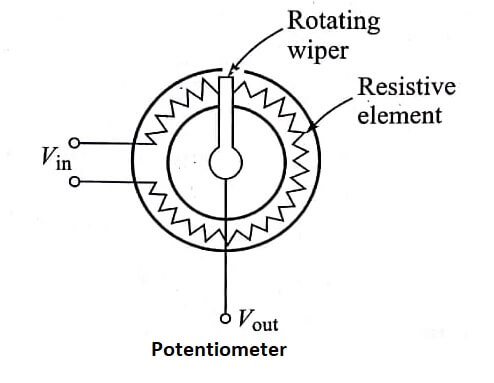 Essentially the pot acts as a voltage divider network. That is, the voltage across the resistive element is divided into two parts by a wiper.

Measuring this voltage gives the position of the wiper. The function of the potentiometer can be represented by the following function:

where Vo(t) is the output voltage, Kp is the voltage constant of the pot in volts per radian (or volts per inch in the case of a linear pot) and θ(t) is the position of the pot in radians (or inches). Since a pot requires an excitation voltage, in order to calculate Vo, we can use

where Vex is the excitation voltage, θtot is the total travel available of the wiper, and θact is the actual position of the wiper.

In addition, the variation in wiper contact between the coil and the wiper can lead to noise in position measurement. 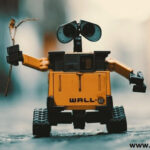 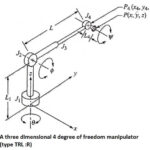 A 4-Degree of Freedom Manipulator in Three Dimensions