Because of the wide use of single mode fiber connectors optic links and because of the greater alignment precision required for these systems, this section addresses single-mode connector coupling losses. Based on the gaussian-beam model of single-mode fiber fields the following equation gives the coupling loss (in decibels) between single-mode fibers that have unequal mode-field diameters (which is an intrinsic factor) and lateral, longitudinal, and angular offsets plus reflections (which are all extrinsic factors).

In implementing an optical fiber link, two of the major system questions are how to launch optical power into a particular fiber from some from one fiber type of luminescent source and how to couple optical power such as the into another. Launching optical power from a source into a fiber entails considerations numerical aperture, core size, refractive-index profile, and core-cladding index difference of the fiber, plus the size, radiance, and angular power A distribution of the single mode fiber connectors source.

The launching or coupling efficiency depends on the type of fiber that is attached to the source and on the coupling process; for example, whether or not lenses or other coupling improvement schemes are used.

In practice, many source suppliers offer devices with a short length of optical fiber (1 m or less) already attached in an optimum power-coupling configuration. This section of fiber is generally referred to as a flylead or a pigtail. The power-launching problem for these pigtailed sources thus reduces to simpler one of coupling optical power from one fiber into another. The effects to be considered in this case include fiber misalignments; different core sizes, numerical apertures, and core refractive-index profiles; plus the need for clean and smooth fiber end faces that are that are polished at a slight angle to prevent back reflections. either perpendicular to the axis or An alternate arrangement consists of light sources and optical fiber receptacles that are integrated within a transceiver package. To achieve fiber-to-fiber coupling in this case, the Single mode fiber connectors from a cable is simply mated to the built-in connector in the transceiver package. Among the various commercially available configurations are (SFP) devices.

B at a given diode drive current. Radiance is the optical power radiated into a unit solid angle per unit emitting surface area and is generally specified in terms of watts per square centimeter per steradian.

Since the optical power that can be coupled into a single mode fiber depends on the radiance (on the spatial distribution of the optical power), the radiance of an optical source rather than the total output power is the important parameter when considering source-to-fiber coupling efficiencies.

As noted earlier, a light source may be supplied with a short (1- to 2-m) fiber flylead attached to it in order to facilitate coupling the source to a system fiber. To achieve a low coupling loss, this flylead should be connected to a system fiber that has a nominally identical NA and core diameter. A certain amount of optical power (ranging from 0.1 to 1 dB) is lost at this junction, the exact loss depending on the connecting mechanism and on the fiber type; this is discussed in next post.

In addition to the coupling loss, an excess power loss will occur in the first few tens of meters of a multimode system fiber. This excess loss is a result of non-propagating modes scattering out of the fiber as the launched modes come to an equilibrium condition. This loss is of particular importance for surface-emitting LEDs, which tend to launch power into all modes of the fiber. Fiber-coupled lasers are less prone to this effect since they tend to excite fewer non-propagating fiber modes.

As we noted in Chapter 4, edge-emitting laser diodes have an emission pattern that nominally has a full width at half-maximum (FWHM) of 30-50° in the plane perpendicular to the active area junction and an FWHM of 5-10° in the plane parallel to the junction. Since the angular output distribution of the laser is greater than the fiber acceptance angle, and since the laser emitting area is much smaller than the fiber core, spherical or cylindrical lenses or optical fiber tapers15-19 can also be used to improve the coupling efficiency between edge-emitting laser diodes and optical fibers. This also works well for vertical-cavity surface-emitting lasers (VCSELs). Here, coupling efficiencies to multimode fibers of 35 percent result for mass-produced connections of laser arrays to parallel optical fibers, and efficiencies of up to 90 percent are possible by direct (lensless) coupling from a single VCSEL source to a multimode fiber.

Mechanical alignment is a major problem when joining two fibers, owing to their microscopic size. A standard multimode graded-index fiber core is 50-100 um in diameter, which is roughly the thickness of a human hair, whereas single-mode fibers have diameters on the order of 9 um. Radiation losses result from mechanical misalignments because the radiation cone of the emitting fiber does not match the acceptance cone of the receiving fiber. The magnitude of the radiation loss depends on the degree of misalignment.

Longitudinal separation occurs when the fibers have the same axis but have a gap s between their faces. Angular misalignment results when the two axes form an angle so that the fiber end faces are end no longer parallel. Axial displacement (which is also often called lateral displacement) results when the axes of the two fibers are separated by a distance d.

In the early years of optical fiber applications, LEDs were traditionally considered only for multimodefiber systems. However, around 1985, researchers recognized that edge-emitting LEDs can launch sufficient optical power into a single-mode fiber for transmission at data rates up to 560 Mb/s over several kilometers+3 49. The interest in this arose because of the cost and reliability advantages of LEDs over laser diodes. Edge-emitting LEDs are used for these applications since they have a laserlike output pattern in the direction perpendicular to the junction plane.

To rigorously evaluate the coupling between an LED and a single-mode fiber we need to use the formalism of electromagnetic theory rather than geometrical optics, because of the monomode nature of the fiber. However, coupling analyses of the output from an edge-emitting LED to a single-mode fiber can be carried out wherein the results of electromagnetic theory are interpreted from a geometrical point 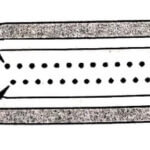