Having said that each object contains its own separate data, we must now amend that slightly. If a data item in a class is declared as static, only one such item is created for the entire class, no matter how many objects there are. A static data item is useful when all objects of the same class must share a common item of information. A static data member variable defined as static has characteristics similar to a normal static variable: It is visible only within the class, but its lifetime is the entire program.

In this case a static variable count could be included as a member of the class. All the objects would have access to this variable. It would be the same variable for all of them; they would all see the same count.

An Example of Static Class Data

The class foo in this example has one data item, count, which is type static int. The constructor for this class causes count to be incremented. In main() we define three objects of class foo. Since the constructor is called three times, count is incremented three times. Another member function, getcount(), returns the value in count. We call this function from all three objects, and as we expected each prints the same value. Here’s the output:

If we had used an ordinary automatic variable as opposed to a static variable for count, each constructor would have incremented its own private copy of count once, and the output would have been 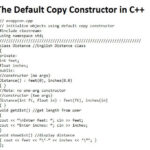 The Default Copy Constructor in C++ 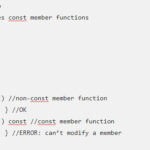