A fabrication process for integrated circuits generally involves many steps of material deposition, material removal, and patterning, as illustrated in the following example.

A generic microfabrication process for realizing a field effect transistor, the building block of modern integrated circuits, is illustrated in figure. By repeating the cycle of deposition-lithography-etching, devices with arbitrary complexity can be built.

In this particular case, six major cycles transforms a bare silicon wafer to one with a metal-oxide-semiconductor (MOS) field effect transistor (FET) on the front surface.

The nature of each step is clearly marked. Letters D, L, E, and M denotes deposition, lithography (photo exposure and development), etching, and modification/treatment of materials.

A brief description of each step is presented below:

Step 1.0. The figure depicts the cross section of a starting bare silicon wafer. The wafer thickness is not drawn to scale. Material process steps occurring on the backside of a wafer are not drawn in future steps for the sake of simplicity.

Step 2.0. A layer of oxide is deposited. The oxide is patterned using the following subsequent steps (2.1 through 2.3). This oxide layer is here only to serve a transitional purpose. (This point will become obvious later.)

Step 3.0. The photoresist is removed using organic solvents. The patterned oxide is used as a mask against impurity doping performed in step 3.1 through 3.3.

3.1. A layer of material containing dopant impurities is deposited.
3.2. The wafer is thermally treated, causing the dopant to diffuse into silicon in areas not covered by the oxide.
3.3. The dopant-source layer deposited in step 3.1 is removed.

Step 4.0. The oxide is removed. Note that many steps and layers of materials are involved to transform a bare wafer (step 1.0) to a wafer with dopant in selective places (step 4.0).

Additional processes (steps 4.1 through 4.4) are then performed to produce another layer of patterned oxide.

4.1. Another layer of silicon oxide is grown.
4.2. A photosensitive resist is deposited.
4.3. The resist is lithographically patterned.
4.4. Using the resist as a mask, the oxide is etched.

5.1. A very thin oxide is grown. This so-called gate oxide layer must have very high quality and are free of contaminants and defects.
5.2. A resist layer is again deposited.
5.3. The resist is lithographically patterned.
5.4. The resist serves as a mask for selectively etching the gate oxide.

Step 6.0. The resist deposited in step 5.2 is removed. The active regions not covered by oxide will provide electrical contact to metal. A gate electrode, made of polycrystalline silicon, is then deposited and patterned in steps 6.1 through 6.4.

Step 7.0. The resist is removed by using organic solvents. The difference between steps 6.0 to 7.0 is the addition of polycrystalline silicon. Each transistor must be connected with each other and to the outside through low-resistivity metal wires. The metal wires are made in steps 7.1 through 7.3.

7.1. A layer of metal is deposited.
7.2. and 7.3. The metal is coated with resist and lithographically patterned.
7.4. The resist serves as a mask for etching the metal.

The process used in the industry follows the basic flow diagramed in figure but involves more detailed steps for quality assurance, functional enhancement, and for increasing the yield and repeatability. Many more steps may incur alter step 8.0 as well. A complete process run from the start to the finish may take 3 months, and 20-40 mask plates. 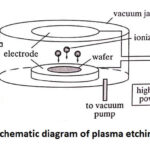 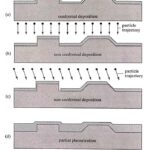 Points of Consideration for Etching Process