The User Datagram Protocol (UDP) is defined in RFC 768. It provides an unreliable connectionless transport service on top of the unreliable network layer connectionless service. The main characteristics of the UDP service are :

This additional addressing is provided by port numbers. When a server using UDP is enabled on a host, this server registers a port number. This port number will be used by the clients to contact the server process via UDP.

When the server process replies to this request, the server’s UDP implementation will send the reply as originating from port 5678 on the server host and destined to port 1234 on the client host.

UDP uses a single segment format shown in the figure below.

As the port numbers are encoded as a 16 bits field, there can be up to only 65535 different server processes that are bound to a different UDP port at the same time on a given server. In practice, this limit is never reached. However, it is worth noticing that most implementations divide the range of allowed UDP port numbers into three different ranges : 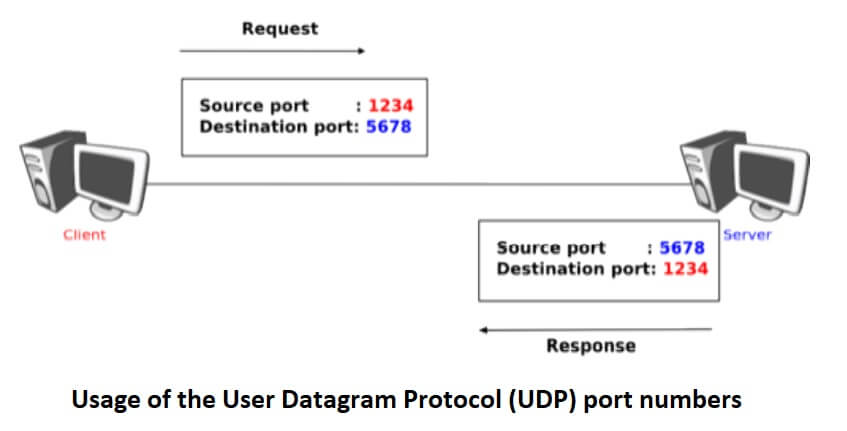 In most Unix variants, only processes having system administrator privileges can be bound to port numbers smaller than 1024. Well-known servers such as DNS, NTP or RPC use privileged port numbers.

When a client needs to use UDP, it usually does not require a specific port number. In this case, the User Datagram Protocol implementation will allocate the first available port number in the ephemeral range. The range of registered port numbers should be used by servers. In theory, developers of network servers should register their port number officially through IANA, but few developers do this.

Note: Computation of the UDP checksum

The checksum of the UDP segment is computed over :

This pseudo-header allows the receiver to detect errors affecting the IP source or destination addresses placed in the IP layer below. This is a violation of the layering principle that dates from the time when UDP and IP were elements of a single protocol.

It should be noted that if the checksum algorithm computes value ‘0x0000’, then value ‘0xffff’ is transmitted. A User Datagram Protocol segment whose checksum is set to ‘0x0000’ is a segment for which the transmitter did not compute a checksum upon transmission. Some NFS servers chose to disable UDP checksums for performance reasons, but this caused problems that were difficult to diagnose.

In practice, there are rarely good reasons to disable UDP checksums. A detailed discussion of the implementation of the Internet checksum may be found in RFC 1071

Several types of applications rely on UDP. As a rule of thumb, UDP is used for applications where delay must be minimised or losses can be recovered by the application itself.

A first class of the UDP-based applications are applications where the client sends a short request and expects a quick and short answer. The DNS is an example of a UDP application that is often used in the wide area.

However, in local area networks, many distributed systems rely on Remote Procedure Call (RPC) that is often used on top of UDP. In Unix environments, the Network File System (NFS) is built on top of RPC and runs frequently on top of UDP.

A second class of UDP-based applications are the interactive computer games that need to frequently exchange small messages, such as the player’s location or their recent actions. Many of these games use UDP to minimise the delay and can recover from losses. 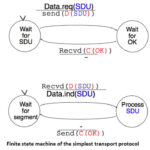 Reliable Data Transfer on Top of a Perfect Network Service 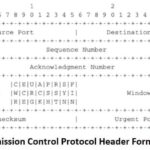