As we discussed before, the IP addresses were originally designed with two levels of addressing. To reach a host on the Internet, we must first reach the network and then the host.

It soon became clear that we need more than two hierarchical levels, for two reasons. First, an organization that was granted a block in class A or B needed to divide its large network into several subnetworks for better security and management.

The idea of splitting a block to smaller blocks is referred to as subnetting. In subnetting, a network is divided into several smaller subnetworks (subnets) with each subnetwork having its own subnetwork address.

Example : Three level addressing can be found in the telephone system if we think about the local part of a telephone number as an exchange and a subscriber connection:

Example : Figure shows a network using class B addresses before subnetting. We have just one network with almost 216 hosts. The whole network is connected, through one single connection, to one of the routers in the Internet. Note that we have shown /16 to show the length of the netid (class B).

Each subnetwork can now have almost 214 hosts. The network can belong to a university campus with four different schools (buildings). After subnetting, each school has its own subnetworks, but still the whole campus is one network for the rest of the Internet. Note that /16 and /18 show the length of the netid and subnetids.

The network mask is used when a network is not subnetted. When we divide a network to several subnetworks, we need to create a subnetwork mask (or subnet mask) for each subnetwork. A subnetwork has subnetid and hostid as shown in figure. 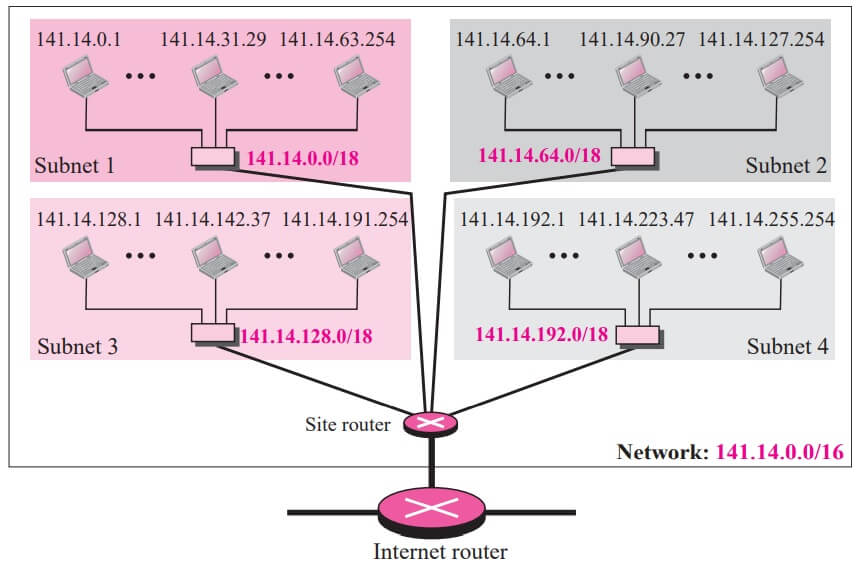 Example : we show that a network is divided into four subnets. Since one of the addresses in subnet 2 is 141.14.120.77, we can find the subnet address as: 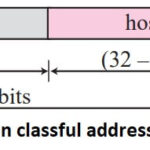 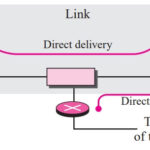 Delivery and Forwarding of IP Packets