Cerf and Kahn’s landmark 1973 paper outlined the protocols to achieve end-to-end delivery of data. This was a new version of NCP. This paper on transmission control protocol (TCP) included concepts such as encapsulation, the datagram, and the functions of a gateway.

Shortly thereafter, authorities made a decision to split TCP into two protocols: Transmission Control Protocol (TCP) and Internet Protocol (IP). IP would handle datagram routing while TCP would be responsible for higher level functions such as segmentation, reassembly, and error detection. The new combination became known as TCP/IP.

In 1981, under a DARPA contract, UC Berkeley modified the UNIX operating system to include TCP/IP. This inclusion of network software along with a popular operating system did much for the popularity of networking. The open (non-manufacturer specific) implementation on Berkeley UNIX gave every manufacturer a working code base on which they could build their products.

In 1983, authorities abolished the original ARPANET protocols, and TCP/IP became the official protocol for the ARPANET. Those who wanted to use the Internet to access a computer on a different network had to be running TCP/IP.

Another milestone in Internet history was the creation of CSNET in 1981. CSNET was a network sponsored by the National Science Foundation (NSF). The network was conceived by universities that were ineligible to join ARPANET due to an absence of defense ties to DARPA. CSNET was a less expensive network; there were no redundant links and the transmission rate was slower. It featured connections to ARPANET and Telenet, the first commercial packet data service.

By the middle 1980s, most U.S. universities with computer science departments were part of CSNET. Other institutions and companies were also forming their own networks and using TCP/IP to interconnect. The term Internet, originally associated with government-funded connected networks, now referred to the connected networks using TCP/IP protocols.

In 1990, ARPANET was officially retired and replaced by NSFNET. In 1995, NSFNET reverted back to its original concept of a research network.

In 1991, the U.S. government decided that NSFNET was not capable of supporting the rapidly increasing Internet traffic. Three companies, IBM, Merit, and MCI, filled the void by forming a nonprofit organization called Advanced Network and Services (ANS) to build a new, high-speed Internet backbone called ANSNET.

The Internet today is not a simple hierarchical structure. It is made up of many wide and local area networks joined by connecting devices and switching stations. It is difficult to give an accurate representation of the Internet because it is continuously changing new networks are being added, existing networks need more addresses, and networks of defunct companies need to be removed. 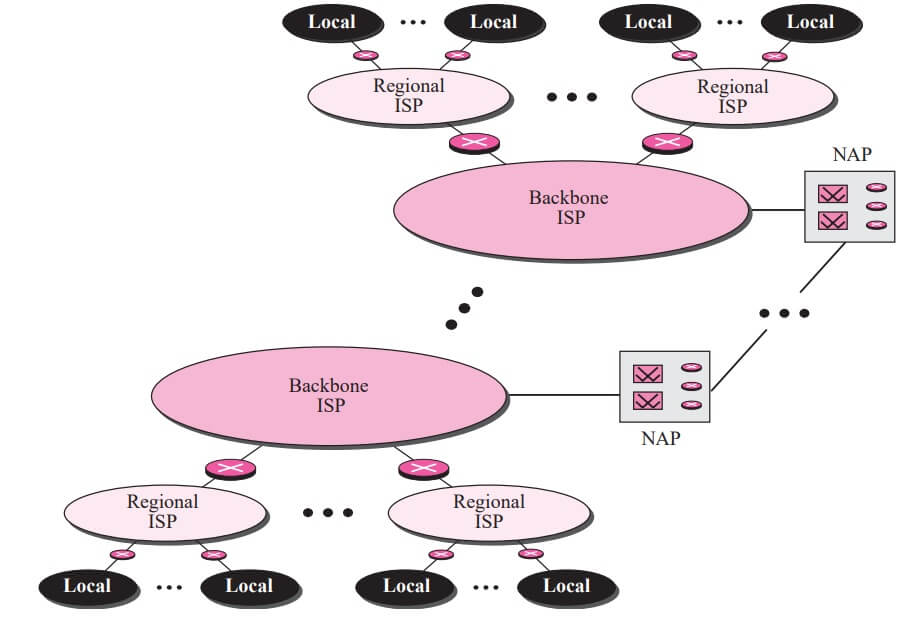 Backbone ISPs are created and maintained by specialized companies. There are many backbone ISPs operating in North America; some of the most well-known are SprintLink, PSINet, UUNet Technology, AGIS, and internet MCI.

To provide connectivity between the end users, these backbone networks are connected by complex switching stations (normally run by a third party) called network access points (NAPs). Some regional ISP networks are also connected to each other by private switching stations called peering points. Backbone ISPs normally operate at a high data rate (10 Gbps, for example).

Regional ISPs are small ISPs that are connected to one or more backbone ISPs. They are at the second level of hierarchy with a lesser data rate.

Local ISPs provide direct service to the end users. The local ISPs can be connected to regional ISPs or directly to backbone ISPs. Most end users are connected to the local ISPs. Note that in this sense, a local ISP can be a company that just provides Internet services, a corporation with a network to supply services to its own employees, or a nonprofit organization, such as a college or a university, that runs its own network. Each of these can be connected to a regional or backbone service provider.

The 1990s saw the explosion of the Internet applications due to the emergence of the World Wide Web (WWW). The web was invented at CERN by Tim Berners-Lee. This invention has added the commercial applications to the Internet.

The following is a list of important Internet events in chronological order:

Growth of the Internet 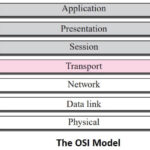