A flat plate is the most common type of solar thermal collector, and is usually used as a solar hot water panel to generate solar hot water. A weatherproofed, insulated box containing a black metal absorber sheet with built in pipes is placed in the path of sunlight. Solar energy heats up water in the pipes causing it to circulate through the system by natural convection (thermosyphon). The water is usually passed to a storage tank located above the collector. This passive solar water heating system is generally used in hotels and homes in sunny climates such as those found in southern Europe.

In the non-concentrating type, the collector area (the area that intercepts the solar radiation) is the same as the absorber area (the area absorbing the radiation). In these types the whole solar panel absorbs the light.

There are many flat plate collector designs but generally all consist of (1) a flat plate absorber, which intercepts and absorbs the solar energy, (2) a transparent cover(s) that allows solar energy to pass through but reduces heat loss from the absorber, (3) a heat transport fluid (air, antifreeze or water) flowing through tubes to remove heat from the absorber, and (4) a heat insulating backing. One flat plate collector is designed to be evacuated, to prevent heat loss.

Some types of solar collectors are specifically designed to contain potable water. In areas where freezing is a possibility, metal collectors must be carefully plumbed so they completely drain down using gravity before freezing can happen so that they do not crack. Other recently developed collectors are freeze tolerant instead. These can freeze without damage because their water channels are typically made of food grade polymers such as silicone rubber, which is flexible and remains stable at temperatures of 200°C.

Other collectors are part of a sealed heat exchange system, rather than having the potable water flow directly through the collectors. A mixture of water and propylene glycol (which is used in the food industry) can be used as a heat exchange fluid to protect against freeze damage, up to a temperature that depends on the proportion of propylene glycol in the mixture. The use of glycol lowers the water’s heat carrying capacity only marginally, while the addition of an extra heat exchanger may lower system performance at low light levels.

These collectors have multiple evacuated glass tubes which heat up solar absorbers and, ultimately, solar working fluid in order to heat domestic hot water, or for hydronic space heating. The vacuum within the evacuated tubes reduce convection and conduction heat losses, allowing them to reach considerably higher temperatures than most flat plate collectors. The evacuated tubes draw their energy from the available light rather than outside temperature. For these reasons, they can perform well in colder conditions. The advantage is largely lost in warmer climates, except in those cases where very hot water is desirable. The high temperatures that can occur may require special system design to avoid or mitigate overheating conditions though some have built in temperature limitation.

The advantage this design has over the flat plate type is that the constant profile of the round tube means that the collector is always perpendicular to the sun’s rays and therefore the energy absorbed is approximately constant over the course of a day.

These collectors heat air directly, almost always for space heating. They are also used for pre-heating make up air in commercial and Industrial HVAC systems.

An asphalt solar collector collects heat using fluid circulating through an array of pipes embedded in the surface of a road. Black roads tend to absorb the heat of the sun up to the point when they radiate heat as quickly as they are absorbing It. The surface temperature of roads in direct sunshine can often reach 15°C higher than the ambient air temperature.

An asphalt solar collector gives a second function to standard building fabric that will need to be built in any event. The heat collected from asphalt solar collectors in summer can be deposited in Thermal Banks constructed beneath the insulated foundation of buildings to provide space heating in winter, through the use of ground source heat pumps. The Co-efficient of Performance of a heat pump can double, if it starts from a warm thermal bank instead of starting with cold from the ground.

This is the oldest method of getting heat from the sun. It involves simply exposing a pigment carrying fluid which simultaneously acts as the transfer medium. They use the principle of volume absorption with modern designs that include vacuum insulation. 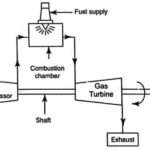 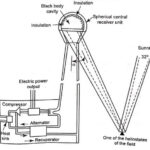