Vapour compression refrigeration system uses a liquefiable vapour as the refrigerant. In this system, the refrigerant used alternatively undergoes a change of phase from vapour to liquid and liquid to vapour during the cycle. In this, the isentropic expansion of Carnot cycle is replaced by a throttling process, expansion in a valve or capillary tube. A simple vapour compression refrigeration system is shown in fig.

The latent heat of vapourisation is utilized for absorbing the heat from low temperature space and transfers it to surrounding so that the Space is maintained at a temperature lower than that of surrounding.

The main function of compressor is to increase the pressure and temperature of the refrigerant above atmospheric. The compressor used here is of reciprocating type.

The condenser is used to cool the vapour and the vapour will be converted into liquid.

The receiver is a storage tank, which stores the liquid.

The valve is used to reduce the temperature and pressure of the liquid refrigerant.

Evaporator causes the cooling effect in the refrigeration space by absorbing the heat from the space. It is made up of copper coils.

The high pressure vapor refrigerant from the condenser enters the expansion or throttle valve where it expands to the required pressure. During expansion pressure is reduced and the vapour becomes partially converted to liquid and produces cooling effect. This process is represented in p-h diagram as 3-4.

A mixture of low temperature vapor and liquid from expansion valve is then enters the evaporator and absorbs heat from the space to be refrigerated. Thus the “Refrigerating effect” is obtained. This process is represented in p-h diagram as 4-1.

Because of this, liquid becomes vapour (state 1) and this vapour enters the compressor. There it is compressed, thus the pressure goes up. This process is represented in p-h diagram as 1-2. This high pressure vapour enters the condenser. There, it looses its latent heat and becomes liquid. (Process 2-3) The liquid refrigerant is stored in a receiver and supplied to the expansion valve, and the cycle continues. 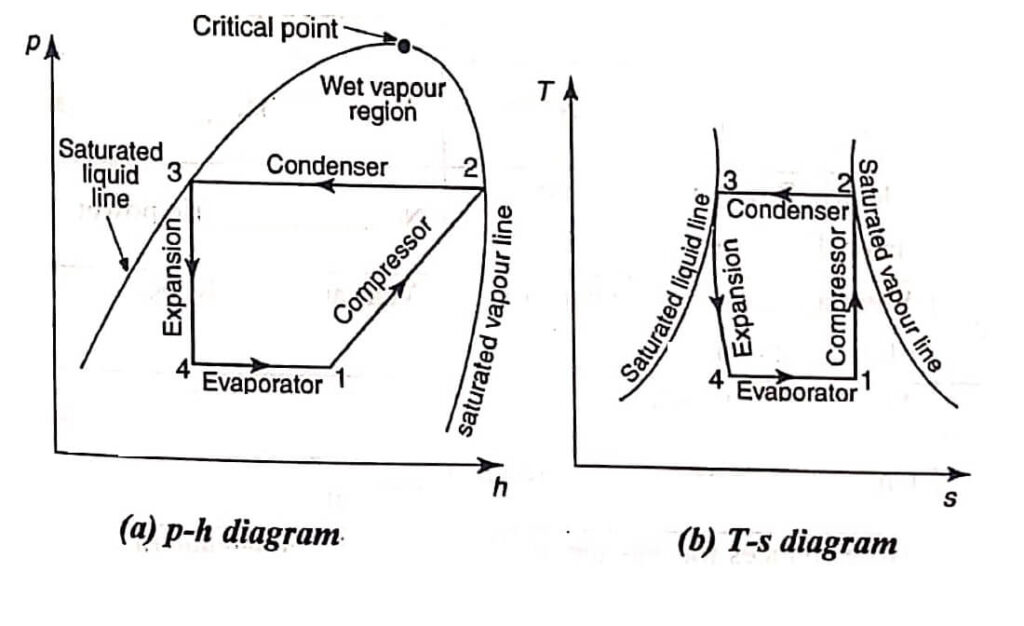 The above processes are represented on a p – h and T-s chart as shown in fig. (a) and (b) respectively.

There are two types of vapor absorption refrigeration systems depending on the refrigerant and absorbent. 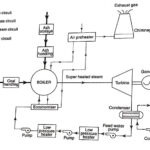