Wireless communication is one of the fastest-growing technologies. The demand for connecting devices without the use of cables is increasing everywhere. Wireless LANs can be found on college campuses, in office buildings, and in many public areas.

In this section, we concentrate on two wireless technologies for LANs: IEEE 802.11 wireless LANs, sometimes called wireless Ethernet, and Bluetooth, a technology for small wireless LANs.

IEEE has defined the specifications for a wireless LAN, called IEEE 802.11, which covers the physical and data link layers.

Basic Service Set – IEEE 802.11 defines the basic service set (BSS) as the building block of a wireless LAN. A basic service set is made of stationary or mobile wireless stations and an optional central base station, known as the access point (AP). Figure shows two sets in this standard.

The BSS without an AP is a stand-alone network and cannot send data to other BSSs. It is called an ad hoc architecture. In this architecture, stations can form a network without the need of an AP; they can locate one another and agree to be part of a BSS. A BSS with an AP is sometimes referred to as an infrastructure network.

Extended Service – Set An extended service set (ESS) is made up of two or more BSSs with APs. In this case, the BSSs are connected through a distribution system, which is usually a wired LAN. The distribution system connects the APs in the BSSs.

IEEE 802.11 does not restrict the distribution system; it can be any IEEE LAN such as an Ethernet. Note that the extended service set uses two types of stations: mobile and stationary. The mobile stations are normal stations inside a BSS. The stationary stations are AP stations that are part of a wired LAN.

When BSSs are connected, the stations within reach of one another can communicate without the use of an AP. However, communication between two stations in two different BSSs usually occurs via two APs.

There are two different MAC sublayers in this protocol, however; the one that is used most of the time is based on CSMA/CA (carrier sense multiple access with collision avoidance).

Figure shows the exchange of data and control frames in time. 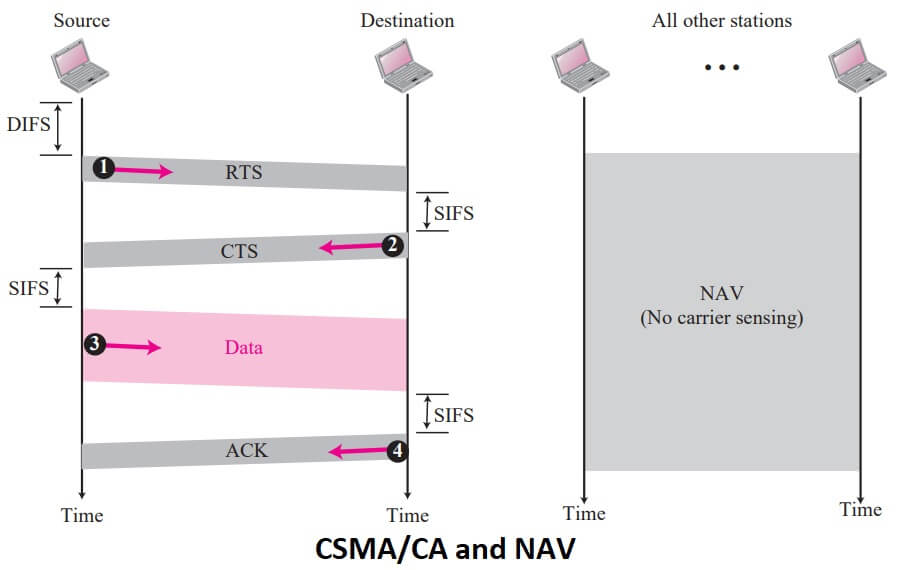 Before sending a frame, the source station senses the medium by checking the energy level at the carrier frequency.

The source station sends data after waiting an amount of time equal to SIFS.

The destination station, after waiting an amount of time equal to SIFS, sends an acknowledgment to show that the frame has been received. Acknowledgment is needed in this protocol because the station does not have any means to check for the successful arrival of its data at the destination. On the other hand, the lack of collision in CSMA/CD is a kind of indication to the source that data have arrived.

Network Allocation Vector – How do other stations defer sending their data if one station acquires access? In other words, how is the collision avoidance aspect of this protocol accomplished? The key is a feature called NAV.

When a station sends an RTS frame, it includes the duration of time that it needs to occupy the channel. The stations that are affected by this transmission create a timer called a network allocation vector (NAV) that shows how much time must pass before these stations are allowed to check the channel for idleness. Each time a station accesses the system and sends an RTS frame, other stations start their NAV. In other words, each station, before sensing the physical medium to see if it is idle, first checks its NAV to see if it has expired. Figure also shows the idea of NAV.

What happens if there is collision during the time when RTS or CTS control frames are in transition, often called the handshaking period? Two or more stations may try to send RTS frames at the same time. These control frames may collide. However, because there is no mechanism for collision detection, the sender assumes there has been a collision if it has not received a CTS frame from the receiver. The back-off strategy is employed, and the sender tries again.

The wireless environment is very noisy; a corrupt frame has to be retransmitted. The protocol, therefore, recommends fragmentation the division of a large frame into smaller ones. It is more efficient to resend a small frame than a large one.

The MAC layer frame consists of nine fields, as shown in Figure

Frame control (FC). The FC field is 2 bytes long and defines the type of frame and some control information.

Addresses. There are four address fields, each 6 bytes long. The meaning of each address field depends on the value of the To DS and From DS subfields and will be discussed later.

Sequence control. This field defines the sequence number of the frame to be used in flow control.

Frame body. This field, which can be between 0 and 2312 bytes, contains information based on the type and the subtype defined in the FC field.

Management Frames Management frames are used for the initial communication between stations and access points.

For control frames the value of the type field is 01; the values of the subtype fields for frames we have discussed are shown in Table

Functions of Layer in the OSI Model