When the crank rotates from ODC to IDC (i.e., C to A), the piston moves inward to the left and a high pressure is built up in the cylinder. The increased pressure causes the suction valve to close and the discharge valve to open. Thus, the liquid is carried to the discharge tank through the delivery pipe.

The delivery stroke is completed when the crank occupies the ODC position. The suction and delivery stroke are alternatively carried out, and the liquid is pumped from the sump to the discharge tank.

What is the main difference between single acting and double acting reciprocating pump? 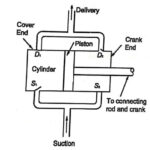