In two stroke cycle engine, one working cycle is completed in two strokes of the piston (one up and down movement) or one revolution of the crankshaft. Hence, it is called as two stroke engines.

One working cycle consists of the following four processes.

The schematic diagram of two stroke engine is given in fig. It consists of a cylinder in which all the operations are performed. The piston reciprocates inside the cylinder.

The piston is connected to the crankshaft through connecting rod and the crank. Inside of the cylinder, valve ports are placed. Opening and closing of ports are performed by the position of the piston.

The above diagram describes the spark ignition (SI) engine. In the case of compression ignition (CI) engines, the spark plug is replaced by fuel injector. A two-stroke engine consists of ports instead of valves. In two stroke engines, both the suction and compression process are carried out in the first stroke, expansion and exhaust processes in the second stroke. Therefore, it develops power in each revolution of the crank shaft.

The working principle of two stroke S.I. engine is described as follows.

The first stroke consists of the suction and compression processes. During the first stroke, the piston moves upward from BDC to TDC. When the piston is at BDC, the partially compressed air fuel mixture from crank case enters into the cylinder through transfer port as shown fig. Then the piston moves upward and compresses the air contained in it till the piston reaches TDC. At the end of the compression stroke, the spark plug produces spark, it. will ignite the compressed high pressure fuel air mixture.

When the piston is at TDC, the inlet port opens and the air fuel mixture from the carburetor enters into the crank case as shown in fig. Thus, one stroke of the piston is completed.

When air fuel mixture is ignited, both the pressure and temperature of the products of combustion will suddenly increase. Therefore, the piston receives power impulse from the expanded gas and it pushes the piston downward and also produces the power stroke. This process is described in fig. During the expansion stroke, some of the heat energy produced is converted into mechanical work.

During downward stroke of piston, already entered air fuel mixture in the crank case is partially compressed by the underside of the piston. This pre compression process is called crank case compression. At the end of power stroke, the exhaust port opens and burnt gases are sent out of the engine through this port as shown in fig.

Two stroke cycle engines are provided with ports. The timing sequence of events like opening and closing of various ports are shown graphically in terms of crank angles from dead center positions. This diagram is known as port timing diagram. Fig. shows the port timing diagram for two stroke cycle SI engines. The inlet port is opened by the piston 45° to 55° before TDC. The inlet port is closed by the piston 45° to 55° after TDC position.

The working of two stroke C.I engine slightly differs from the S.I engine. Instead of sparkplug, the fuel injector is placed on the top of the cylinder.

During the upward movement of the piston, a slight vacuum will be produced at the crank case to suck the air from the atmosphere.

Second stroke: When the fuel and air are ignited, it suddenly increases the pressure and temperature of the gas. Therefore, the gases will expand and it pushes the piston downward and producing the power stroke as shown in fig. During the expansion, some of the heat energy produced is converted in to mechanical work.

During the downward stroke of the piston, first it uncovers the exhaust port and the burnt gases are sent out of the engine, as shown in fig.  At the same time, all the burnt gases are not exhausted. Therefore, scavenging takes place in the cylinder. (Scavenging process already defined in previous section).

At the time of downward movement of the piston, already entered air in the crankcase is partially compressed by the underside of the piston. This process is called crank case compression. 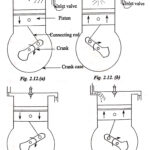 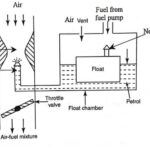 Types of Carburetor and Working, Defects