The types of carburetor can be classified according to the following considerations. Carburetors are used almost all SI engine for the preparation of combustible air fuel mixture as a charge.

Types of carburetor are :

this are types of carburetor.

The main components of simple carburetor are: float chamber, float, nozzle, venturi, throttle valve, inlet valve, and metering jet. In the float chamber, a constant level of petrol is maintained by the float and a needle valve.

The float chamber is ventilated to atmosphere. This is used to maintain atmospheric pressure inside the chamber. The float which is normally a metallic hollow cylinder rises and closes the inlet valve as the fuel level in the float chamber increases to certain level.

The mixing chamber contains venturi, nozzle and throttle valve. The venturi tube is fitted with the inlet manifold. This tube has a narrow opening called venturi. A nozzle is provided just below the centre of this venturi. The nozzle keeps the same level of petrol as that of the level in the float chamber. The mixing chamber has two butterfly valves.

During the suction stroke, vacuum is created inside the cylinder. This causes pressure difference between the cylinder and outside the carburettor. Due to this, the atmospheric air enters into the carburetor. The air flows through venturi. The venturi increases the velocity of air and reduces the pressure. This produces the partial vacuum at the tip of the nozzle. Because of this vacuum, the fuel comes out from the nozzle in the form of fine spray. These fine fuel particles mix with the incoming air to form air fuel mixture. Thus, it gives a homogeneous mixture of air fuel to the engine.

Defects in a simple carburetor

Simple carburettor is found useful only to a particular load and speed condition. But in actual practice, the engine has to run at different speeds and load conditions.

There are two basic reasons for defects in a simple carburettor.

For starting the engine from rest, it requires rich mixture. But, the simple carburetor will supply lean mixture during starting. It will create starting difficulty for the engine. In order to enrich fuel mixture at very low speeds, devices like ticklers, choke, adjustable area jet and a separate air passage are provided. 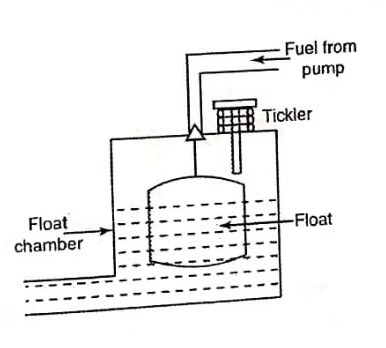 Ticklers : Ticklers are the devices used for flooding of the carburettor while starting an engine. More fuel would be provided by depressing the tickler which would depress the float.

Choke : A choke is a simple butterfly valve (same as throttle valve) fitted at the top of the air horn as shown in fig. 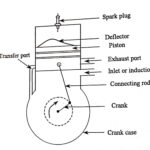 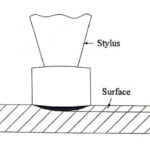 Errors in Measurement – and Types of Error