Breach of duty means non-observance of due care which is required in a particular situation. What is the standard of care required? The standard is that of a reasonable man or of an ordinarily prudent man.

If the defendant has acted like a reasonably prudent man, there is no negligence. As stated by Alderson B. in Blyth V. Birmingham Waterworks Co. “Negligence is the omission to do something which a reasonable man, breach of duty guided upon those considerations which ordinarily regulate the conduct of human affairs, would do or doing something which a prudent and reasonable man would not do.” The law requires the caution which a prudent man would observe.

“We ought to adhere to the rule which requires in all cases a regard to caution such as a man of ordinary prudence would observe…. The care taken by a prudent man has always been the rule laid down.” The standard is objective and it means
what a judge considers should have been the standard of a reasonable man. “It is…left to the judge to decide what, in the circumstances of the particular case, the reasonable man would have in contemplation, and what accordingly, breach of duty the party sought to be made liable ought to have foreseen.

The law requires taking of two points into consideration to determine the standard of care required : (a) the importance of the object to be attained, (b) the magnitude of the risk, and (c) the amount of consideration for which services, etc. are offered.

(a) The importance of the object to be attained

The law does not require greatest possible care but the care required is that of a reasonable man under certain circumstances. The law permits taking chance of some measure of risks so that in public interest various kinds of activities should go on.

“As has been pointed out, if all the trains in this country were restricted to a speed of five miles an hour, there would be fewer accidents, but our national life would be intolerably slowed down. The purpose to be served, if sufficiently important, justifies the assumption of the abnormal risk.”

A balance has, therefore, to be drawn between the importance and usefulness of an act and the risk created thereby.

Thus, a certain speed may not be negligent for a fire brigade vehicle but the same speed may be an act of negligence for another vehicle.

In Latimer V. A.E.C. Ltd.,’ due to an exceptionally heavy rainstorm, the respondent’s factory was flooded with water. Some oily substance got mixed up with water. After the water drained away, an oily film remained on the surface of the floor and the floor surface became slippery. Respondents spread all the available sawdust on the floors to get rid of the oily film but some areas remained uncovered due to lack of further supplies of sawdust.

Similar was also the position in K. Nagireddi v. Government of Andhra Pradesh. In this case, the plaintiff had an orchard consisting of 285 fruit bearing trees. The State Government constructed a canal under Nagarjunasagar project for irrigation purpose without cementing the floors and the banks of the canal.

Due to the absorption of excess water from that canal, through the roots, all the trees died. The plaintiff brought an action contending that not cementing the floor of the canal or its bunds was negligence, for which the State should be liable.

The contention was rejected and it was held that the construction of projects or laying of canals for irrigation purposes was a great necessity, particularly in Indian conditions, and without them the land would be wilderness, the country would be a desert, and not cementing of the floors or the banks of such a big canal was no negligence on the part of the State Government. 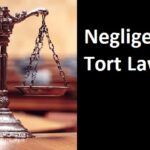 Essentials of Negligence Under the Law of Torts