The jurisprudential concept of negligence defies any precise definition. Eminent jurists and leading judgments it is said have assigned various meanings to negligence. The Apex Court in Jacob Mathew V. State of Punjab, observed :

“Negligence is the breach of a duty caused by the omission to do something which a reasonable man, guided by those considerations which ordinarily regulate the conduct of human affairs would do, or doing something which a prudent and reasonable man would not do. Actionable negligence consists in the neglect of the use of ordinary care or skill towards a person to whom the defendant owes the duty of observing ordinary care and skill, by which neglect the plaintiff has suffered injury to his person or property.”

The definition involves three constituents of negligence : (1) A legal duty to exercise due care on the part of the party complained of towards the party complaining the former’s conduct within the scope of the duty; (2) breach of the said duty; and (3) consequential damage.

According to Charlesworth & Percy, Negligence, in current forensic speech, negligence has three meanings. These are (i) a state of mind, in which it is opposed to intention; (ii) careless conduct; and (iii) the breach of duty to take care that is imposed by either common or statute law. All three meanings are applicable in different circumstances but any one of them does not necessarily exclude the other meanings.

Negligence as a tort and as a crime

The term ‘negligence’ is used for the purpose of fastening the defendant with liability under the Civil Law and, at times, under the Criminal Law.

To fasten liability in Criminal Law, the degree of negligence has to be higher than that of negligence enough to fasten liability for damages in Civil Law. The essential ingredient of mens rea cannot be excluded from consideration when the charge in a criminal court consists of criminal negligence. In R. v. Lawrence, Lord Diplock spoke in a Bench of five and the other Law Lords agreed with him. He reiterated his opinion in R. V. Caldwell and dealt with the concept of recklessness as constituting mens rea in criminal law.

His Lordship warned against adopting the simplistic approach of treating all problems of criminal liability as soluble by classifying the test of liability as being “subjective” or “objective”, and said “Recklessness on the part of the doer of an act does presuppose that there is something in the circumstances that would have drawn the attention of an ordinary prudent individual to the possibility that his act was capable of causing the kind of serious harmful consequences that the section which creates the offence was intended to prevent, and that the risk of those harmful consequences occurring was not so slight that an ordinary prudent individual would feel justified in treating them as negligible.

“It is only when this is so that the doer of the act is acting ‘recklessly’ if, before doing the act, he either fails to give any thought to the possibility of there being any such risk or having recognized that there was such risk, he nevertheless goes on to do it.”

The moral culpability of recklessness, the Court said, “is not located in a desire to cause harm. It resides in the proximity of the reckless state of mind to the state of mind present when there is an intention to cause harm. There is, in other words, a disregard for the possible consequences.

The consequences entailed in the risk may not be wanted, and indeed the actor may hope that they do not occur, but this hope nevertheless fails to inhibit the taking of the risk. Certain types of violation, called optimizing violations, may be motivated by thrill seeking. These are clearly reckless.

In order to hold the existence of criminal rashness or criminal negligence, “it shall have to be found out that the rashness was of such a degree as to amount to taking a hazard knowing that the hazard was of such a degree that injury was most likely imminent. Lord Atkin in his speech in Andrews v. Director of Public Prosecutions, stated, “Simple lack of care such as will constitute civil liability is not enough; for purposes of the criminal law there are degrees of negligence; and a very high degree of negligence is required to be proved before the felony is established.

” Thus, a clear distinction exists between “simple lack of care” incurring civil liability and “very high degree of negligence” which is required in criminal cases. Lord Porter said in his speech in the same case.

“A higher degree of negligence has always been demanded in order to establish a criminal offence than is sufficient to create civil liability.”

The fore-quoted statement of law in Andrews has been noted with approval by this Court in Syad Akbar V. State of Karnataka. The Supreme Court has dealt with and pointed out with reasons the distinction between negligence in civil law and in criminal law. Their Lordships have opined, “there is a marked difference as to the effect of evidence, viz., the proof, in civil and criminal proceedings. In civil proceedings, a mere preponderance of probability is sufficient, and the defendant is not necessarily entitled to the benefit of every reasonable doubt; but in criminal proceedings, the persuasion of guilt must amount to such a moral certainty as convinces the mind of the Court, as a reasonable man, beyond all reasonable doubt.

Where negligence is an essential ingredient of the offence, the negligence to be established by the prosecution must be culpable or gross and not the negligence merely based upon an error of judgment.” 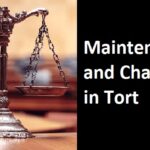 Maintenance and Champerty in Tort 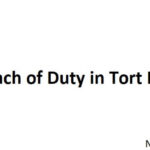