Measurement is a comparison of a given unknown quantity with one of its predetermined standard values adopted as a unit. Metric system of measurement provides us with means of describing various phenomena in quantitative terms. It plays an important role in all branches of engineering and science. There are two important requirements of the measurement:

The word measurand is used to designate the particular physical parameter being observed, unknown quantity which is to be measured. It is the input quantity to the measuring process.

This unknown quantity is compared with the available standard quantities such length, mass, time and it produces a result.

Some of the significance or applications of measurement are described below.

There are two basic methods of measurements:

Measurements may be classified as primary, secondary and tertiary based on the complexity of the measurement system.

In primary measurement, any physical parameters are measured by comparing directly with reference standards. For example

The primary measurement provides subjective information only. Here, the observer indicates only that one rod is longer than the other rod.

One object contains more or less mass than the other. The primary measurement is under the category of direct measurement.

A secondary measurement involves only one translation to be done on the quantity under the measurement. For example, if we want to measure the pressure of a gas in a container, it may not be observable.
Therefore, it requires,

Therefore, the primary signal is first transmitted to a transducer where it is effected to translate into a length change in pressure gauge.

Then the secondary signal of length change is transmitted to the observer’s eye.

Indirect comparison makes use of some form of transducing device which converts the quantity to be measured into an analogous signal. The analogous signal is then processed by intermediate devices and displayed on the output device as known function of the input. Indirect methods for measurements are used in those cases where the direct measurement is difficult. In this method, an empirical relationship is generally established between the metric system of measurement mode and result mode that are desired.

In this method, the quantity to be measured is compared with other known value. Example: Comparators.

The value of the quantity to be measured and determined is coincided with certain lines and signals.

Measuring a quantity a is directly related with the definition of that quantity.

The sensor or measuring tip of the instrument touches the area (or) diameter (or) surface to be measured. Example: Vernier caliper.

In this method, the quantity to be measured is first balanced by a known value and then it is balanced by other new known value. Example: Determination of mass by balancing methods.

The value of quantity to be measured is combined with known value of the same quantity. Example: Volume determination by liquid displacement.

The value to be measured is directly indicated by a deflection of pointer. Example: pressure measurement.

There are number of measuring instruments used in practice. Therefore, it is necessary to identify the common features or the basic elements of a generalized measuring system.

A generalized measuring system consists of the following common elements:

Fig. indicates the functional elements of an instrument which are indicated by various blocks.

It is the first element which receives energy from the metric system of measurement medium and produces an output corresponding to the measurand. This output is then converted into an analogous electrical signal by transducer.

It converts the output electrical signal of the primary sensing element (which may be a voltage, frequency or some other electrical parameter) into a more suitable form without changing the information content of the input signal. In some instrument, there is no need of using variable conversion element while some other instruments require variable conversion element.

This element is used to manipulate the signal presented to it and preserving the original nature of the signal. In other words, it amplifies the input signal to the required magnification. For example, an electronic voltage amplifier receives a small voltage as input and produces greater magnitude of voltage as output. A variable manipulation element does not
necessarily follow a variable-conversion element, it may precede it.

It transmits the data from one element to the other. It may be as simple as shaft and gear assembly system or as complicated as a telemetry a system which is used to transmit signal from one place to another.

It is an element which is used to modify the data before displayed or finally recorded. It may be used for the following purposes:

These are the elements that they finally communicate the information of measured variable to a human observer for monitoring, control or analysis purpose. The value of the measured variable may be indicated by an analog indicator (pointer and a scale), digital indicator (ammeter, voltmeter, etc) or by a recorder (magnetic taps, camera, T.V. equipment, storage type C.R.T.) 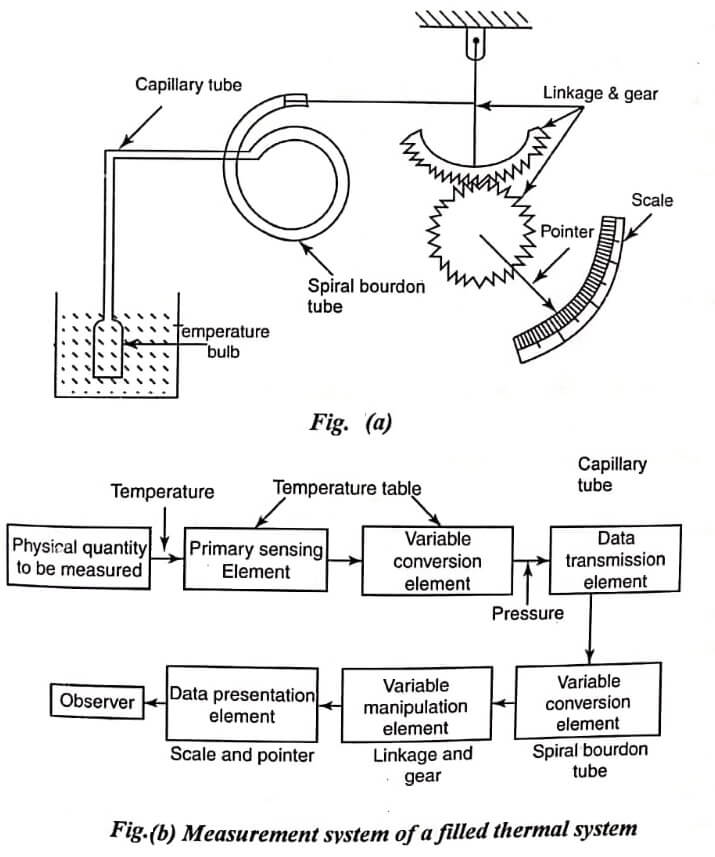 As an example of a measurement system, consider a filled thermal system used for process temperature measurement as shown in fig. The liquid or gas filled temperature bulb acts as a primary sensing element and variable conversion element.

It senses the input quantity (i.e. temperature) and converts it into a pressure built up within the bulb. This pressure is transmitted through the capillary tube (which acts as a data transmission element) to a spiral bourdon type pressure gauge. It acts as a variable conversion element which converts pressure into displacement.

The displacement is manipulated by the linkage and gearing arrangement to give a larger pointer deflection. This arrangement acts as a variable manipulation element. The pointer and scale indicate the temperature, thus serving as data presentation elements. 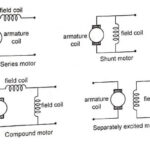 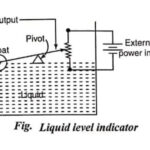