Like variables, all functions in a C program must be declared, before they are invoked. A function declaration (also known as function prototype) consists of four parts.

They are coded in the following formate : Function-type function-name (parameter list);

This is very similar to the function header line except the terminating semicolon. For example, mul function defined in the previous section will be declared as : int mul (int m, int n); /* Function prototype */

Equally acceptable forms of declaration of mul function are

When a function does not take any parameters and does not return any value, its prototype is written as : void display (void);

A prototype declaration may be placed in two places in a program.

When we place it in a function definition (in the local declaration section), the prototype is called a local prototype. Such declarations are primarily used by the functions containing them.

The place of declaration of a function defines a region in a program in which the function may be used by other functions. This region is known as the scope of the function. (Scope is discussed later in this chapter.) It is a good programming style to declare prototypes in the global declaration section before main. It adds flexibility, provides an excellent quick reference to the functions used in the program, and enhances documentation.

Prototypes: Yes or No

Prototype declarations are not essential. If a function has not been declared before it is used, C will assume that its details available at the time of linking. Since the prototype is not available, C will assume that the return type is an integer and that the types of parameters match the formal definitions. If these assumptions are wrong, the linker will fail and we will have to change the program. The moral is that we must always include prototype declarations, preferably in global declaration section.

Parameters (also known as arguments) are used in three places:

The formal and actual parameters must match exactly in type, order and number. Their names, however, do not need to match.

A function, depending on whether arguments are present or not and whether a value is returned or not, may belong to one of the following categories:

In the sections to follow, we shall discuss these categories with examples. Note that, from now on, we shall use the term arguments (rather than parameters) more frequently. 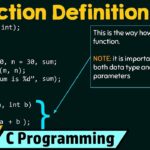 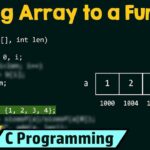