Radiography (X-ray) is an NDT method used to radiographic inspection material and components using the concept of differential adsorption of penetrating radiation. Each specimen under evaluation will have differences in density, thickness, shapes, sizes or absorption characteristics. Thus, the different amount of radiation is absorbed. The unabsorbed radiation that passes through the part is recorded on film, fluorescent screens or other radiation monitors. Indications of internal and external conditions will appear as variants of black/white/gray contrasts on exposed film or variants of color on fluorescent screens.
This technique is suitable for the detection of internal defects in ferrous and nonferrous metals, and other materials. Radiography has an advantage over some of the other processes in that the radiography provides permanent reference for the internal soundness of the object that is radiographed. X-rays and gamma rays are used in the radiographic inspection test.

The X-ray emitted from a source has an ability to penetrate metals as a function of the accelerating voltage in the X-ray emitting tube. -If a void present in the object being radiographed, more X-rays will pass in that area and film under the part in turn will have more exposure than non-void, areas. Hence, the voids show as darkened areas on a clear background as shown in image.
This test is used to detect the internal defects such as cracks, porosity, blow holes, inclusions. In this test, a film or a photographic plate is placed behind and in contact with weld surface. The portion is exposed to a beam of X-rays. X-rays are, produced in an X-ray tube. During exposure, X-rays penetrate through the weldment and then affect the X-ray film.
After developing the film, a radiograph is obtained. This radiograph shows the nature of defect.
Blow holes, cracks, cavities and porosity appear higher than the surrounding area. This is a quicker method but the cost of test is high. The radiograph is used as a permanent record. The radiation may affect human beings.

1. It can be used to inspect virtually all materials.
2. Detects both surface and subsurface defects can be identified.
3. It has the ability to inspect complex shapes and multi-layered structures without disassembly.
4. Minimum part preparation is required,
5. Information is presented pictorially.
6. A permanent record is provided which may be viewed at a time and place distant from the test.
7. it can be used for inspecting hidden areas (direct access to surface is not required). 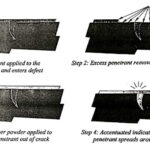 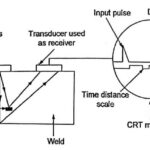