Bearings may be classified broadly according to the motions they allow and according to their principle of operation as well as by the directions of applied loads they can handle.

Based on the directions of applied loads the bearings are classified as radial and thrust bearings. The bearing which is used to provide radial support to the rotating shaft is called radial bearing. In addition to radial loads, they carry substantial thrust loads at high speeds, in either direction. Ball bearings are the most widely used radial bearings.

The bearing which is used to support very large thrust loads. along the axis of the shaft is called thrust bearings. They cannot take much radial load and are mostly used for low-speed applications.

In plain journal bearing rubbing surfaces are usually provided with lubricant. This is the simplest types of bearings, widely used, relatively high friction, suffers from stiction in some applications. Some bearings use pumped lubrication and behave similarly to fluid bearings. At high speeds life can be very short.

Ball or rollers are used to prevent or minimize rubbing. It is used for higher loads than plain bearings with lower friction.

Fluid is forced between two faces and held in by edge seal. It can fail quickly due to grit or dust or other contaminants.

Faces of bearing are kept separate by magnets. It needs considerable power. Maintenance is free.

A journal bearing sometimes is also referred as a friction bearing which is a simple bearing. It consists of a shaft which is also called as journal which rotates in the bearing with a layer of lubricating oil separating the two parts through fluid dynamic effects. The bearing is generally a simple polished hollow cylinder, made of white metal, lead based babbit, tin based babbit, leaded bronze, copper lead alloy, gun metal, phosphor bronze, aluminum alloy, nylon, in which the journal rotates with lubricant filling the gap.

Rather than just reducing friction between the contact surfaces, the lubricant should be thick enough so that the surfaces do not come in contact at all while rotation. If oil is used, it is generally fed into a hole in the bearing under pressure, as it is done for the most heavily-loaded bearings in an automobile engine. Sometimes the bearings may be used dry without lubrication when the bearings are made of plastics such as nylon or PTFE.

Plain journal bearings are classified according to the nature of lubrication under which it operates. These bearings may be hydro-dynamically lubricated or hydrostatically lubricated. The difference between hydrostatic and hydrodynamic forces is in the way the pressure that supports the bearing is initially and subsequently maintained.

In a hydrostatic lubrication, the pressure is always present at a desirable value and is achieved by an external pump which forces lubricant into the system. The pump provides a magnitude of pressure that aims to supplement the pressure which is
created by the bearings rotation, if any. This pressure makes the separation of journal and bearing filled with oil during rotation as shown in Figure. 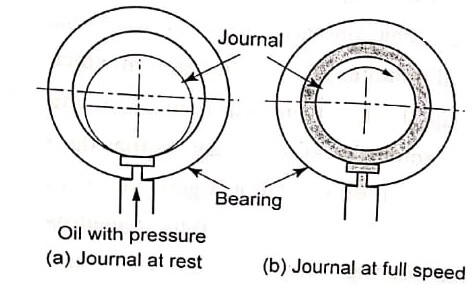 Hydrodynamic bearings require much greater care in design and operation than hydrostatic bearings. They are also much more prone to initial wear because lubrication does not occur until there is rotation of the shaft. At low rotational speeds the lubrication may not attain complete separation between journal and bearing.

As a result, hydrodynamic bearings are often aided by secondary bearings which support the shaft during start and stop periods, protecting the fine tolerance machined surfaces of the journal bearing. Figure shows mechanism of hydrodynamic lubrication.

In solid film lubrication, a thin film of solid lubricants such as hexagonal or flake graphite, molybdenum disulphide, and metal sulphide are coated on the inner surface of the bearing. Solid and dry film lubricants form a dry layer or coating that
excludes moisture and reduces friction, binding, and wear. Solid lubricants maintain a low coefficient of friction up to 400° C and are available in powder, sprayable coating, and solid machinable forms. Wax, paraffin and stearate compounds are
suitable for some lubrication, anti-corrosive and anti-static applications.

Sometimes the following factors may prevent the built up of a film thick enough for full-film or hydrodynamic lubrication.

At this time the contact surfaces may be separated by lubricant films of thin layer which adheres to the bearing surface.

Rolling element bearings minimize friction by removing any possible sliding between bearing surfaces and replacing all contacts with rolling interfaces. They substitute balls or rollers for 2 hydrodynamic or hydrostatic fluid film to carry loads
with reduced friction. They utilize a separator to space the hardened rolling elements apart. The rolling element bearing is also called as antifriction bearing since the friction is negligible as compared to the journal bearing. 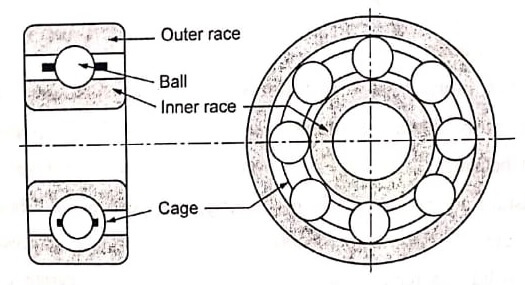 Roller bearings use cylinders of slightly greater length than diameter. Roller bearings typically have higher radial load capacity than ball bearings, but a low axial capacity and higher friction under axial loads. If the inner and outer races are
misaligned, the bearing capacity often drops quickly when compared to either a ball bearing or a spherical roller bearing. 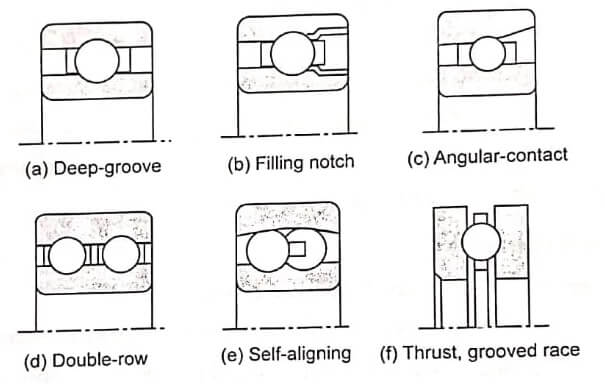 The selection of ball and roller bearings for a given installation depends upon the following factors.

The capacity of the bearing decreases as the speed increases. If a ball bearing operates continuously, its life expectancy measured in hours will obviously be shorter than if operated intermittently.

The proper selection of bearings is most essential and will ensure the longer life of the bearings as well as the life of the machine to which it is used.

If the bearing loads with its directions of the ratios of radial and thrust capacity and speed is accurately determined, its life span can also be established. The necessary bearing size can also be determined. The Anti-Friction Bearing Manufacturers Association Standards (AFBMA) provides standardized dimensions, tolerances and fits of ball and roller bearings.

The rolling element bearing failure occurs due to fatigue. AFBMA standard states that the failure criterion is the first evidence of fatigue. The useful life is often used as the definition of fatigue life. The life of the bearing is defined as number of million revolutions that 90% of the bearings will reach or exceed before fatigue failure. AFBMA denotes this life as rating life or L10 life and is used by most of the manufacturer. 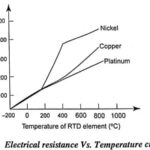 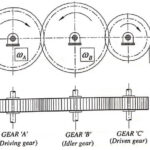