Before discussing the gyroscopic effect on naval ships, first let us brief the terminology used in connection with the naval ship.

The front, top, and side views of a naval ship are shown in fig (a), (b) and (c) respectively.

A sea ship may have the following three movements:

Steering is nothing but turning in a curve while the ship moves forward. During steering (left or right turn) of a ship, the rotor and propeller of the ship (which is spinning about its own axis) precess (changes the axis of spin).

Due to this precession of the spin axis, the reactive gyroscopic couple is applied by the rotor shaft on the ship.

It may be noted that effect of gyroscopic couple on a ship during steering is very much similar to that of an aeroplane taking turn to the left or right hand side.

Thus the gyroscopic effect on the ship during steering may be obtained in the similar way as for aeroplane.

However, for better understanding, the same procedure is repeated for the ship, as below.

Let the rotor/propeller rotates in clockwise direction when seen from the stern and the ship steers left, as shown in Fig.

Illustrates diagrammatically the direction of reactive couple and its effect on the body of the ship, when rotor/propeller rotates in clockwise and aeroplane takes left turn, when seen from the stern.

For simplicity, the Fig is split into four figures as shown in fig. Fig (a) shows the vector diagram, Fig (b) the axis diagram, Fig (c) the plane diagram, and Fig (d) depicts the gyroscopic effect.

Procedure to Determine the Direction of Gyroscopic Couple

As could be seen from fig. The effect of the reactive gyroscopic couple is to raise the bow and depress the stern.

What is gyroscopic torque? 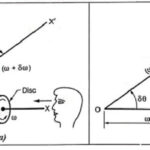 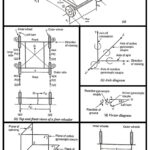 Stability of a Four Wheel Moving in Curved Path