When the plaintiff by his own want of care contributes to the damage caused by the negligence or wrongful conduct of the defendant, he is considered to be guilty of contributory negligence.

An accident would be said to be the result of contributory negligence if “the proximate cause of the accident is the act or omission amounting to want of ordinary care or in defiance of duty or obligation on the part of the complaining party (the plaintiff) has conjoined with the other party’s negligence.”

Whichever party could have avoided the consequence of other’s negligence would be liable for the accident.

If a person’s negligent act or omission was the proximate and immediate cause of death, the fact that the person suffering injury was himself negligent and also contributed to the accident or other circumstances by which the injury was caused would not afford a defence to the other. Contributory negligence is applicable solely to the conduct of a plaintiff.

This is a defence in which the defendant has to prove that the plaintiff failed to take reasonable care of his own safety and that was a contributing factor to the harm ultimately suffered by the plaintiff.

If A, going on the wrong side of the road, is hit by a vehicle coming from the opposite direction and driven rashly by B, A can be met with the defence of contributory negligence on his part.

In Rural Transport Service v. Bezlum Bibi, the conductor of an overcrowded bus invited passengers to travel on the roof of the bus. The driver ignored the fact that there were passengers on the roof and tried to overtake a cart.

As he swerved the bus on the right for the purpose and went on the kucha road, a passenger sitting on the roof was hit by the branch of tree, he fell down, received severe injuries, and then died.

It was held that both the driver and the conductor were negligent towards the passengers, who were invited to sit on the roof. There was also contributory negligence on the part of the passengers including the deceased, who took the risk of travelling on the roof of the bus.

In Davies v. Swan Motor Co. Ltd. an employee of Swansea Corporation, in contravention of the regulations, was riding on the steps attached to the offside of the dust lorry. There was a collision when an omnibus tried to overtake the dusty lorry.

In consequence, an employee standing on the steps of the lorry was hit, seriously injured and ultimately died.

In Yoginder Paul Chowdhury v. Durgadas, the Delhi High Court has held that a pedestrian who tries to cross a road all of a sudden and is hit by a moving vehicle, is guilty of contributory negligence.

Similar decision was also there in Nance v. British Columbia Electric Rly. Co. In that case, the deceased crossed the road which had become slippery due to ice.

As he suddenly came in front of the motor vehicle, he was run over by the same. It was held that there was contributory negligence on the part of the deceased. 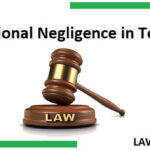