Unfair contract terms act, 1977 limits the right of a person to restrict or exclude his liability resulting from his negligence by a contract term, or by notice. Section 2 of the Act contains the following provisions in this regard.

“Negligence Liability. – (1) A person cannot by reference to any contract term or to a notice given to a person generally or to particular persons exclude or restrict his liability for death or personal injury resulting from negligence.
(2) In the case of other loss or damage, a person cannot so exclude or restrict his liability for negligence except insofar as the term or notice satisfies the requirement of reasonableness.
(3) When a contract term or notice for negligence, a purports to exclude or restrict liability person’s agreement to or awareness of it is not of itself to be taken as indicating his voluntary acceptance of any risk.”

Sub-sec. (1) puts an absolute ban on a person’s right to exclude his liability for death or personal injury resulting from negligence, by making a contract Or giving a notice to that effect. It means that even if the defendant has procured plaintiff’s consent (by an agreement or a notice) to suffer death or personal injury resulting from the plaintiff’s negligence, plaintiff’s liability is not negatived thereby.

Sub-sec. (2) deals with cases where the damage caused to the plaintiff is other than death and personal injury. In such a case, exclusion of a contract term or notice is possible only if the term of notice satisfies the liability by requirement of reasonableness.

Sub-sec. (3) further provides that even could exclude or restrict his in those cases where the defendant liability by a contract term or notice, the agreement or awareness about such agreement or notice, is not plaintiff’s of itself to be taken as indicating his voluntary acceptance of any risk. It means that not merely an agreement or notice may be enough to restrict the liability, something more, for instance, further evidence about the defendant’s genuineness of the plaintiff’s consent, and voluntary assumption of the risks must also be proved. 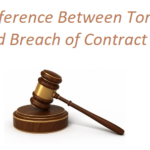 Difference Between Tort and Breach of Contract – Law of Torts 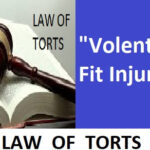