Variables in C differ in behavior from those in most other languages. For example, in a BASIC program, a variable retains its value throughout the program. It is not always the case in C. It all depends on the ‘storage’ class a variable may assume.

In C not only do all variables have a data type, they also have a storage class. The following variable storage classes are most relevant to functions:

We shall briefly discuss the scope, visibility and longevity of each of the above class of variables. The scope of variable determines over what region of the program a variable is actually available for use (‘active’).

It is very important to understand the concept of storage classes and their utility in order to develop efficient multifunction programs.

A variable declared inside a function without storage class specification is, by default, an automatic variable. For instance, the storage class of the variable number in the example below is automatic.

One important feature of automatic variables is that their value cannot be changed accidentally by what happens in some other function in the program.

This assures that we may declare and use the same variable name in different functions in the same program without causing any confusion to the compiler.

Write a multifunction to illustrate how automatic variables work.

A program with two subprograms function1 and function2 is shown in Fig. m is an automatic variable and it is declared at the beginning of each function.

When executed, main calls function2 which in turn calls function1. When main is active, m = 1000; but when function2 is called, the main’s m is temporarily put on the shelf and the new local m = 100 becomes active.

Similarly, when function1 is called, both the previous values of m are put on the shelf and the latest value of m (=10) becomes active. As soon as function1 (m=10) is finished, function2 (m=100) takes over again.

As soon it is done, main (m=1000) takes over. The output clearly shows that the value assigned to m in one function does not affect its value in the other functions; and the local value of m is destroyed when it leaves a function.

There are two consequences of the scope and longevity of auto variables worth remembering. First, any variable local to main will be normally alive throughout the whole program, although it is active only in main.

For example, the  External declaration of integer number and float length might appear as:

The variables number and length are available for use in all the three functions. In case a local variable and a global variable have the same name, the local variable will have precedence over the global one in the function where it is declared. Consider the following example:

When the function references the variable count, it will be referencing only its local variable, not the global one. The value of count in main will not be affected.

A program to illustrate the properties of global variables is presented in Fig. Note that variable X is used in all functions but none except fun2, has a definition for X. Because x has been declared ‘above’ all the functions, it is available to each function without having to pass x as a function argument.

Further, since the value of x is directly available, we need not use return(x) statements in fun1 and fun3.

However, since fun2 has a definition of x, it returns its local value of x and therefore uses a return statement. In fun2, the global x is not visible. The local x hides its visibility here.

Once a variable has been declared as global, any function can use it and change its value. Then, subsequent functions can reference only that new value.

One other aspect of a global variable is that it is available only from the point of declaration to the end of the program. Consider a program segment as shown below:

We have a problem here. As far as main is concerned, y is not defined. So, the compiler will issue an error message. Unlike local variables, global variables are initialized to zero by default. The statement y = y+1; in fun1 will, therefore, assign 1 to y.

In the program segment above, the main cannot access the variable y as it has been declared after the main function. This problem can be solved by declaring the variable with the storage class extern.

Although the variable y has been defined after both the functions, the external declaration of y inside the functions informs the compiler that y is an integer type defined somewhere else in the program.

Note that extern declaration does not allocate storage space for variables. In case of arrays, the definition should include their size as well.

The distinction between definition and declaration also applies to functions. A function is defined when its parameters and function body are specified.

This tells the compiler to allocate space for the function code and provides type information for the parameters.

Since functions are external by default, we declare them (in the calling functions) without the qualifier extern.

As the name suggests, the value of static variables persists until the end of the program. A variable can be declared static using the keyword static like
static int x;
static float y;
A static variable may be either an internal type or an external type depending on the place of declaration.

Therefore, internal static variables are similar to auto variables, except that they remain in existence (alive) throughout the remainder of the program.

Therefore, internal static variables can be used to retain values between function calls. For example, it can be used to count the number of calls made to a function.

A static variable is initialized only once, when the program is compiled. It is never initialized again. During the first call to stat, X is incremented to 1.

Because x is static, this value persists and therefore, the next call adds another 1 to x giving it a value of 2. The value of x becomes three when the third call is made.

Had we declared x as an auto variable, the output would have been:
X=1
X=1
X=1
This is because each time stat is called, the auto variable x is initialized to zero. When the function terminates, its value of 1 is lost.

An external static variable is declared outside of all functions and is available to all the functions in that program.

It is also possible to control the scope of a function. For example, we would like a particular function accessible only to the functions in the file in which it is defined, and not to any function in other files.

This can be accomplished by defining ‘that’ function with the storage class static.

We can tell the compiler that a variable should be kept in one of the machine’s registers, instead of keeping in the memory (where normal variables are stored).

Since a register access is much faster than a memory access, keeping the frequently accessed variables (loop control variables) in the register will lead to faster execution of programs.

This is done as follows: register int count; Although, ANSI standard does not restrict its application to any particular data type, most compilers allow only int or char variables to be placed in the register.

Since only a few variables can be placed in the register, it is important to carefully select the variables for this purpose.

A block can have its own declarations and other statements. It is also possible to have a block of block, thus creating what is known as nested blocks.

When this program is executed, the value C will be 10, not 30. The statement b = a; assigns a value of 20 to b and not zero. Although the scope of a extends up to the end of main it is not “visible” inside the inner block where the variable a has been declared again.

Remember, the variable b is not re-declared in the inner block and therefore it is visible in both the blocks.

That is why when the statement int c = a + b; is evaluated, a assumes a values of 0 and b assumes a value of 10. Although main’s variables are visible inside the nested block, the reverse is not true. 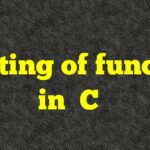 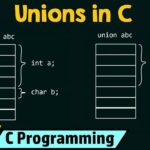